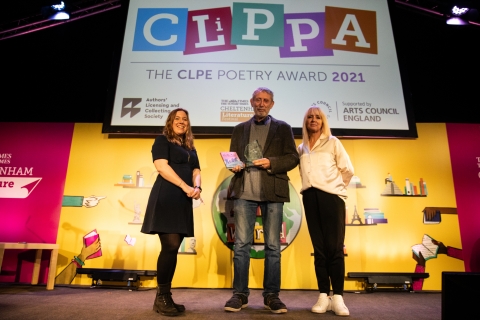 Michael Rosen has today been announced as the winner of this year's CLiPPA for On the Move, Poems About Migration (published by Walker books and illustrated by Quentin Blake).

The announcement of the Award was made at the sold-out Poetry Show hosted by The Times and The Sunday Times Cheltenham Literature Festival on Monday 11 October, in a live Poetry Show, introduced by Allie Esiri and CLiPPA judge, poet Zaro Weil, winner of the 2020 CLiPPA. The Poetry Show featured performances by Michael Rosen and the other shortlisted poets Nikita Gill,  Matt Goodfellow, Manjeet Mann and Jane Newberry  and they were accompanied by another former Children’s Laureate Chris Riddell, who illustrated their poems live on stage.

Schools are now invited to explore the poems in On the Move and the other shortlisted collections through CLPE’s hugely popular Shadowing Scheme launched alongside the announcement of the winner. The CLiPPA Poetry Show is available for schools everywhere to watch online and free of charge.

Details of the rest of the shortlist:

Michael Rosen has previously won the CLiPPA in 2016 for A Great Big Cuddle, also published by Walker Books and illustrated by Chris Riddell, when the award was shared with Sarah Crossan for One (Bloomsbury).

The CLiPPA is delivered in partnership with the Authors’ Licensing and Collecting Society (ALCS) and supported by Arts Council England.