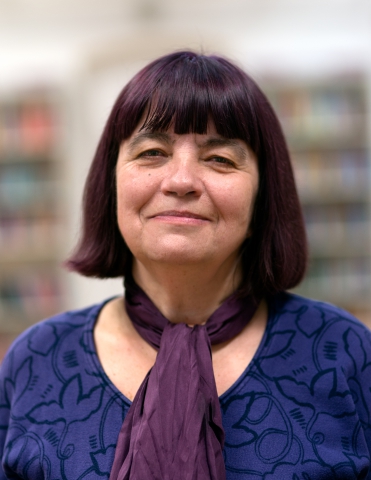 Ann Lazim, our Library and Literacy Development Manager is retiring after working at the CLPE for 29 years.

CLPE's Chief Executive, Louise Johns-Shepherd said: "Ann’s contribution to the work of CLPE has been immense and we are going to miss her so, so much. Through her monthly new book round ups, her much loved book-lists, her encyclopaedic knowledge of traditional tales and her magical ability to locate any book in the library (even when a visitor has put it back in the wrong place!) and through so much more, she has supported our work with teachers, authors, publishers, other organisations and with children. Her knowledge of the children’s literature landscape over the last thirty years is unrivalled and she is going to be missed by all of us at CLPE as well as across the children’s book industry. We will miss her but we wish her so much love for the next chapter of her life, which we know will still be full of books and stories."

To celebrate Ann's time at CLPE, we asked if she could tell us more about her time here...

Ann, you have worked at CLPE for over 29 years. You must have seen some changes in your time!

Tell us about your role as Literature and Library Development Manager and how this has evolved?

When I first joined CLPE in 1992, the librarian’s role was mainly limited to keeping the library up to date and answering enquiries from the staff, course members and visitors. Over time, this has broadened in several directions - for example, networking with publishers has become increasingly important. Promoting children’s books in various ways is a significant part of the role and linking up with all kinds of people involved in the children’s book world is necessary and very enjoyable.

There have been rapid developments in technology linked to the role. When I first started there was no widespread world wide web and email – I can’t imagine being without these now! There were only a couple of computers in the centre and the library catalogue was still on little cards filed in drawers. The Core Booklist was started in the late 1990s and has become an important guide for teachers. It was updated as a printed list roughly every two years and changing this to a website so that it’s possible to make frequent updates has been a vast improvement.

What have you enjoyed most about your role at CLPE?

That has to be working with such creative, committed people in the incredible imaginative current CLPE team and also many others I’ve been lucky enough to work with over the years. Something I’d single out is seeing how the work on Reflecting Realities is developing – the lack of cultural diversity in children’s books in the UK is something I’ve been concerned about throughout my career. Thanks to the work of the CLPE team, especially Farrah, it feels like this is being taken seriously at last.

What will you miss when you retire?

I’ll miss the people who work at and visit CLPE the most. I’ll also miss the mountains of enticing packages that arrive in the post from publishers and wondering what will be inside!

Has there been a particular memorable moment for you whilst working here?

Being librarian at CLPE mainly means talking to adults so the most memorable moments are engaging with children and reminding myself why we’re doing this work. Seeing children on the stage of the National Theatre performing poems from the books shortlisted for CLiPPA has provided some emotional moments. Particularly special for me was when we had an event for National Storytelling Week where groups of primary schoolchildren came and listened to several storytellers. There was one boy who was especially happy hearing the amazing Jan Blake and his teacher told me that this was the first time she had heard him laugh. That was a moment that made everything we do worthwhile.

What are your plans for retirement?

I’m really looking forward to being able to spend some sustained time on research I’ve been doing only in fits and starts for many years and finally writing a biography of some women who were involved in the suffrage movement. I’ll still be involved in children’s books through IBBY (International Board on Books for Young People) and I’ve set up a blog https://slannt.uk/ which will mainly be about children’s literature though it may veer off into some of my other interests later! I’m part of several community groups in my local area and in some ways that’s increased over the last year so there is no way I’ll be bored! And of course I intend to do lots of reading!

Finally, how would you describe your time at CLPE in 3 words?