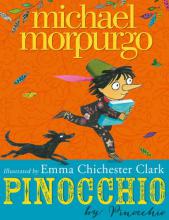 An adaptation of the classic Italian story of the puppet Pinocchio that acknowledges his origins in Carlo Collodi’s novel and his subsequent claim to fame through the Disney film. The picaresque tale of his adventures and the temptations into which he is led is narrated in the first person in a chatty style. Emma Chichester Clark’s illustrations, which combine paint and collage, bring out the comedy elements rather than the darker aspects of the story, although there are places where she shows the sinister side too.

The hardback edition is strongly recommended to get the full effect of the colour illustrations which are diminished by being reproduced in black and white in the paperback.

The Velveteen Rabbit
By Margery Williams
Published by Egmont
Literature