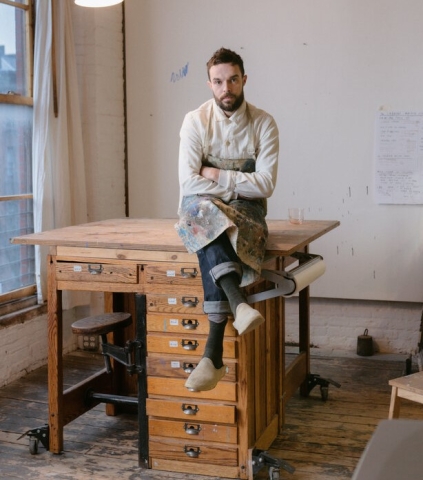 Oliver Jeffers’s visual world is a unity of curiosity and humour and is unrivalled in picture-book publishing. His spellbinding illustrations, thought-provoking stories and characteristically bold handwritten text has made him one of the most visionary artists of our time. His commitment to his work was honoured at the beginning of this year where he received an MBE for his Services in Art. Discovered in a pile of unsolicited manuscripts, his highly acclaimed debut, How to Catch a Star, was first published by HarperCollins Children’s Books in 2004 and was the first in a series of award-winning ‘Boy’ books, including Lost and Found; The Way Back Home and Up and Down. Since then, his books have gone on to sell 12 million copies in forty-seven territories worldwide.

Oliver’s ability to connect to his audience through his art and storytelling has not gone unnoticed. His books have been number one on The New York Times bestseller list on multiple occasions and have won numerous awards, including the Nestlé Gold Medal for Lost and Found; the Irish Picture Book of the Year award for The Incredible Book Eating Boy and This Moose Belongs to Me; CBI’s Book of the Year Award for The Day the Crayons Quit (illustrator); the Orbil Prize for Stuck; The New York Times Best Illustrated Books for The Hueys in the New Sweater, the V&A Book Illustration Award and the British Book Design and Production Awards for The Heart and the Bottle. His books have also been adapted for the screen. Lost and Found was animated for film by Studio AKA and won a BAFTA for Best Animation.

In 2020, Here We Are was also made into an animated film for Apple TV+, narrated by Meryl Streep, and won an Emmy for Outstanding Special Class Daytime Animated Programme. Here We Are: Notes for Living on Planet Earth hit The New York Times bestseller list and won The Times Best Book of the Year and Audio Production’s Best Audio Performer of the Year with sales now over a million copies to date.

Beyond making books for children, he has exhibited in museums and galleries across the globe, including the National Portrait Gallery, the Irish Museum of Modern Art, the Palais Auersperg in Vienna and the Bryce Wolkowitz Gallery in New York. In December 2020, he launched two major international installations – at the Rockefeller Center, New York, and Harrods, London.