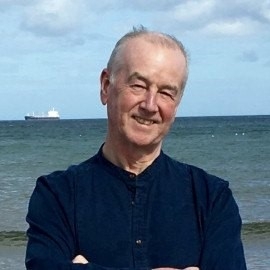 David Almond is the author of Skellig, My Name is Mina, Counting Stars, The Savage, The Colour of the Sun, Brand New Boy, Bone Music and many other novels, stories, picture books, opera librettos, songs and plays.

His work is translated into 40 languages, and is widely adapted for stage and screen. His major awards include the Carnegie Medal, two Whitbread Awards, the Eleanor Farjeon Award, the Michael L Printz Award (USA), Le Prix Sorcières (France) and the Guardian Children’s Fiction Prize.

In 2010 he won the Hans Christian Andersen Award, the world’s most prestigious prize for children’s authors.

David speaks at festivals and conferences around the world. He is Emeritus Professor of Creative Writing at Bath Spa University. He is widely regarded as one of the most exciting, inspirational and innovative children’s authors writing today. He lives in Bath and in Newcastle, the city in which he was born.

In 2021, he was awarded an OBE for services to literature