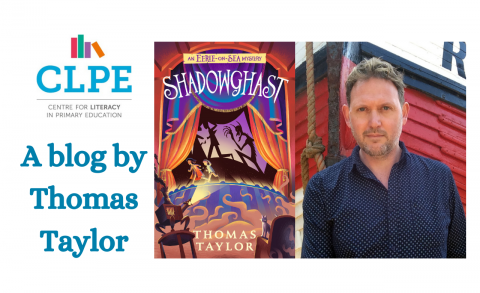 What inspired you to write the Eerie-on-Sea Mysteries?

I was inspired by the experience of living in a seaside town all year round, and seeing how strange and eerie such places can be in the off season, when the deckchairs are gone and the ice cream kiosks are closed, and the bright, summery paint-schemes of the ramshackle attractions fade into the green-grey of a creeping sea mist. Who would visit such a town then? Surely only someone with a very good reason. Or a very bad one…

Then there’s the weird and wonderful pastime of beachcombing (also best pursued in the winter) and the way the sea takes the rubbish and remnants of the past, and rolls them through countless tides into treasures – seaglass, driftwood, fossils – that can be found by anyone with a sharp enough eye.

How would you suggest primary teachers use these books?

I often hear from teachers that my books work well as class reads, and so first and foremost my Eerie-on-Sea adventures are intended to be read for pleasure, and to help make reading fun and accessible. My hope is that if a class read and enjoy Malamander together, then some children might want to go on to the next books in the series for private reading (there will be five books in total). Because I like to use rich and surprising vocabulary, there is also a lot to analyse in a closer read of the text. I write from a visual imagination, so there is also a lot of vivid imagery to draw on, giving children with less confidence with words a visual way into the story through drawing and illustration.

At school, I was always told I was good at drawing, and was encouraged from a young age to aim for art school and then a career as an illustrator. But behind this, and quite secretly, I also fell in love with reading and writing, and longed to try creating my own stories in words alone. It took me a lot of time to pluck up the courage to make a serious attempt, but ultimately, knowing that novels didn’t grow on trees but were written by people, and that – just maybe – I could be one of them, is what motivated me.

Writers such as JRR Tolkien, Terry Pratchett, Douglas Adams, CS Lewis, John Wyndham and Arthur C Clarke were huge influences when I was growing up. Also films like Time Bandits, Labyrinth, The Never Ending Story, and just about anything directed by Stephen Spielberg. Nowadays, with these things buried deep in my imagination, I look to the natural world, and in particular the sea, as well as deep time, deep space, the ancient world, and folklore.

My process for deciding what subjects to write about is quite simple: does it set my imagination alight? If the answer is no, I doubt I could write engaging fiction about it anyway.

The Hobbit and the Lord of the Rings by Tolkien were hugely important to my development as a writer, because they enabled me to break through several reading barriers. I was always a slow reader, and a late developer, but being able to read something as substantial as The Hobbit by age twelve, and then to fight my way through – and love – The Lord of the Rings, gave me a massive boost to my confidence.  I also loved the Sherlock Holmes stories, as well as The Three Investigators, and shorter, serialised stories like this helped me to become invested with characters and worlds more easily. I read comics too – Asterix, Tintin, Lucky Luke – and was never told that these weren’t real books. My grandmother was a librarian, and she would bring a steady stream of tatty ex-library books home, so I was surrounded by books all the time, and saw reading as normal.