Q&A with Jonathan Stroud, all about The Outlaws Scarlett and Browne 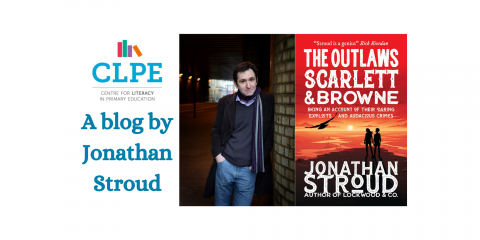 What inspired you to write The Outlaws Scarlett and Browne?

There’s been a lot of talk about Britishness over the last few years, and perhaps some changes in the way we view ourselves. I was keen to write something that touched on this notion of change – whether for good or bad – and explored its implications. Being a fantasy writer, I decided to write about a future Britain where a major occurrence (‘the Cataclysm’) has radically altered not just the landscape and the fauna of the UK, but also the societies that survive in it. And I rather liked the idea of a ‘British Western’, where a few surviving towns cling to old ways, while ravening beasts stalk the home counties beyond. My two heroes, Scarlett and Albert, are both outcasts from these inward-looking towns, but they have the bravery to look ever outwards, and are prepared to face up to the challenges of the dangerous new world.

I think there are several elements that might be interesting to explore. Judicious excerpts might focus on exciting action sequences, breathless chases, encounters with monsters and wild beasts, and the exploration of strange landscapes, all of which might inspire fun creative writing. My central duo, Scarlett McCain and Albert Browne, are strong characters who are very different, and who often annoy each other: a lot of the energy of the book comes from their squabbling and often comic dialogue. Again, samples of this might lead to some interesting writing or drawing tasks (visualising a character’s physical appearance is often a good first step to creating them). Oh, and the book has a map of the (altered) Thames, where wolves and cannibals roam and London has become a lagoon. After a look at this, there would be lots of potential for the creation of invented maps of many other kinds…

At a deep level, I was always a writer and there was nothing conscious in this choice. I was busy making stories and stapling together little books when I was about five, and I have dusty boxes full of subsequent stories, games, comics, sketches and other things that I continued to create throughout my childhood. I think that many children have the same itch or impulse to create, and I was lucky that it remained intact in me when I left university and got a job in publishing. I had no real confidence at this stage about what I wanted to do, but words always attracted me, and I was doubly fortunate that Walker Books, where I got my first editorial job, was happy to let me work on some books for them. I started by creating interactive ‘gamebooks’, filled with puzzles and mazes, but I soon tried my hand at writing a novel, and it was only then that I began to understand what my career might potentially be. I was in my mid-20s by this point. The message, looking back, is that it’s always important to follow what you love – even if your eventual career is slow to come into view.

I have always tried to write the kind of stories that I would have liked to discover on the shelves of a school, library or bookshop. Stories that would have filled me with delight when I was young, and which still have the power to entertain me now. In this regard, my impulse is really no different from the one I had when I was five, and was busily scribbling my own version of the Ladybird Robin Hood tales on old pieces of wallpaper. It’s about bottling the joy you get from stories. I think the books you read and love when you are in your late childhood and early adulthood are the ones that worm deepest into your being, so it’s this experience that I’m particularly keen to recreate and pass on. All my books are adventures of a kind, and their subjects – genies, ghosts, a strange future Britain – are all about the collision between the real world and something fantastical. But within all the excitement lurk certain important themes – loyalty, tolerance, equality, friendship – that play out between my characters and also echo across the worlds they explore. All my books touch on dark themes, but are ultimately life-affirming.

Perhaps the most important books are the ones for which you remember exactly where you were when you first read them, where they attain the status of an event in your life. In this regard, some of the most significant books for me were:

Five on a Treasure Island (Blyton): I read this at a sitting, aged 6, curled in a sunny armchair – the first proper novel I ever finished, and thus the most empowering.

The Lord of the Rings (Tolkien): I remember starting this in bed at my grandparents’ house, aged 10. I was immediately fascinated by the vast created world unfolding before my eyes. Not many jokes, though.

The Penguin Complete Sherlock Holmes (Doyle): Again about 10 years old. I read this for hours lying prone on the floor of a holiday cottage in Burford, while the rest of the family were forced to step over me. They stubbed their toes; I discovered the magic of a different kind of invented world.

Lyonesse (Jack Vance): I was probably 15 or so by this point, and ill in bed with some kind of chest infection, as regularly happened in those days. I had bought this fantasy novel speculatively, and it was a revelation: earthy, ironic, humorous – in many ways the antithesis of Tolkien. It did me far more good than the Lucozade at my elbow. It was a book which acted as a kind of early signpost to the kind of writer I’d one day become.

Discover the free teaching resources for Jonathan's book, The Outlaws Scarlett and Browne...