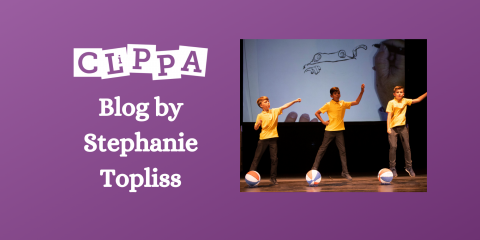 After attending CLPE’s Poetry Twilight session, I was inspired to enter the CLIPPA Shadowing Scheme with my Year 6 class. When the CLIPPA books were announced and one of the books was Kwame Alexander’s Rebound, I knew these down-to-earth ‘street’ poems linking basketball with an emotional story would capture the imagination of both boys and girls in my class. The issues addressed in Rebound were very relatable for our pupils who live in a similar urban environment.

The lesson plans provided by CLPE were excellent, providing plenty of opportunity for pupils to really immerse themselves in the language of the poems. We spent a week exploring a number of different poems from Rebound: looking at the language and the rhythm; experimenting with pace and expression. At the end of the week, I spread the poems we had looked at around the classroom and let the children choose the one they would like to perform. I also gave them completely free choice whether to work alone, in a pair or in a small group. They then had time at school and at home to practise, practise, practise. I encouraged them to experiment with using props, with dividing poems up in different ways, with movement and expression and with opportunities to watch each other and give constructive feedback. Throughout, it was the children’s own decision how to perform their poem. It was wonderful to watch children of all abilities really engage with the poems, develop and share their opinions and grow in confidence with their performances. We then videoed the poems and sent them off to CLIPPA - fingers and toes crossed!

I was absolutely delighted when I received an email saying that one of our groups was one of the Shadowing Scheme winners! The boys were also speechless when they learnt they would be performing on stage at the National Theatre. After overcoming a few logistical issues (the boys were supposed to be at their new high school for their transition day - unsurprisingly, the high schools were delighted that their future pupils had such an amazing opportunity and arranged an alternative visit just for them!), we set off with great excitement for our day at the National.

Throughout the day, I had to keep pinching myself that my pupils, who would not otherwise have these opportunities, were having voice coaching with professionals, tech runs on stage, prop workshops and more. When the rest of Year 6 arrived to take their seats and watch and the theatre filled, excitement turned to nerves as reality hit! But the CLPE team were there with last minute tips and encouragement and Chris Riddell’s amazing and amusing illustrations calmed everyone and, alongside the poets themselves, the different schools performed with confidence. I was so proud!

The CLIPPA Shadowing Scheme helped build my own confidence teaching poetry and gave pupils a WOW moment that they will never forget! I have now moved schools and, as Head of English, am looking forward to introducing the Shadowing Scheme to our staff and pupils and hopefully instilling a love of poetry here too.

Find out more about our CLiPPA and the school's shadowing scheme