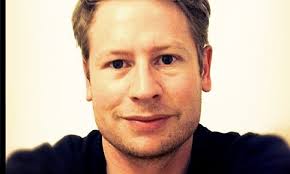 Tom McLaughlin is an author, illustrator and former political cartoonist.

His books include The Story Machine (2015) which was longlisted for the Greenway Medal. ‘ HIs Accidental series of books  (Oxford University Press) has been translated into 10 different languages (The Accidental Prime Minister; Secret Agent and Billionaire and have been nominated for over a dozen awards combined.  HIs latest book is The Day I Became the Most Wanted Boy in the World (2018)

"I write pictures and doodle words for Bloomsbury, Puffin, Oxford University Press, Simon & Schuster, Scholastic, The Guardian, Disney and Nickelodeon. After leaving art college in ’97, I spent nearly 10 years as a political cartoonist for The Western Morning News before going freelance.

I’ve been published both as a writer and an illustrator for a number of publishers, had my books translated across Europe and South America. My picture book about my experiences growing up with dyslexia was longlisted for the Greenaway Medal. Apart from publishing, I’ve also spent time script writer and a character designer for several animation channels.

I live in Devon, spend most of my days drinking tea and dreaming up new stories."

Tom McLaughlin: Illustrating a character from The Story Machine