By Hilda Offen from Blue Balloons and Rabbit Ears

We watch them, hypnotized.
Pale and mysterious,
They rise and fall. Joe says
“They look like ghosts.”

A man behind us sneers
“As I have never seen a ghost,
I can't compare the two.”
His mouth seems full of stones.

“I'd like to touch one,” whispers Mel.
The man brays “No intelligence!
Not one small ounce of brain – “
Mel turns and glares.

“ – In their whole bodies,” says the man.
His wife and boys admire him,
Open-mouthed. They look like fish.
“Let's go,” says Joe. “And see the sharks.”

We spot him later, down in the arcade.
He's riding on an electronic horse.
The horse is small; he is very large.
“This is the way to do it boys!” he cries. 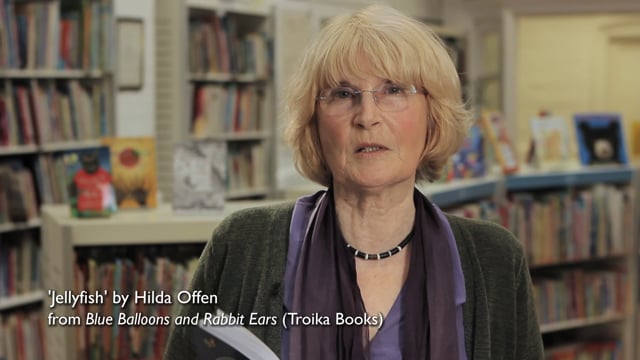