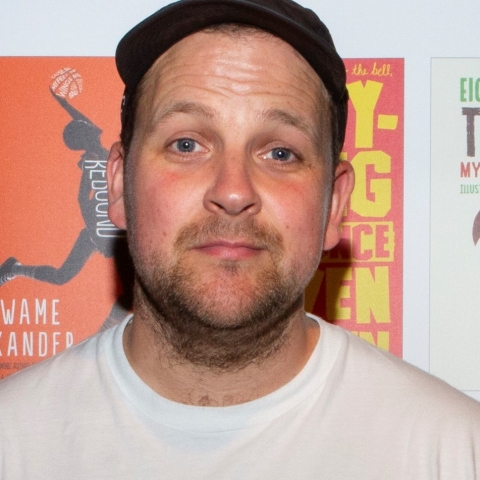 Steven Camden who is an acclaimed script-writer and spoken word artist was today announced as the winner of the annual poetry award at the Lyttleton Stage at the National Theatre, in front of a 900-strong audience of school children who have participated in the CLiPPA's shadowing scheme.  His debut collection, Everything All At Once, (Macmillan Children’s Books),  beat off competition from Carnegie Medal shortlistee Kwame Alexander, for Rebound (Andersen Press), previous CLiPPA winner Rachel Rooney for A Kid in My Class (Otter-Barry Books) and T.S. Eliot Prize winner Philip Gross for Dark Sky Park (Otter-Barry Books) .

The final shortlisted collection, Thinker: My Puppy Poet and Me by beloved US poet Eloise Greenfield (Tiny Owl Publishing) was highly commended by the judges, who were chaired by A.F Harrold.

As he has done for previous CLiPPA Award Ceremonies, Chris Riddell, (former Children’s Laureate, author, illustrator and political cartoonist) successfully entertained everyone by live-drawing the whole event from the stage.

Established in 2003, CLiPPA encourages and celebrates outstanding poetry published for children and stands alone as the only annual award in the UK for published poetry for children. The award is the flagship event in CLPE’s year round championing of poetry.

The ceremony culminated in the announcement of a national poetry reading and writing challenge for children. #MyNPDPoem marks the 25th Anniversary of National Poetry Day which this year will be celebrated on Thursday 3rd October.

View all our CLiPPA resources associated with the shortlisted titles including poems, teaching sequences and videos.