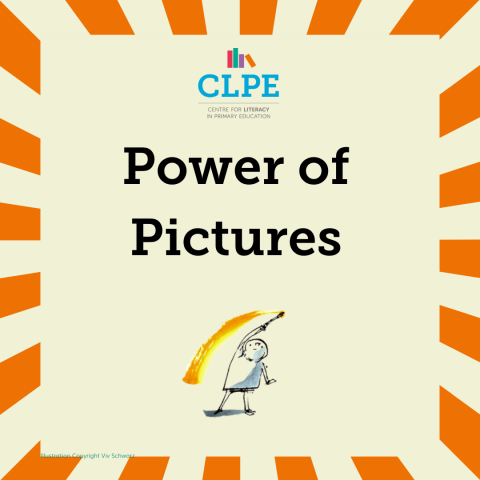 The Power of Pictures was selected for evaluation using a randomised control trial by the RSA/EEF (Royal Society of Arts and Education Endowment Foundation) as part of their Learning About Culture programme to investigate the impact of arts-based learning on academic outcomes.  The *research into the Power of  Pictures programme in schools revealed progress in outcomes for literacy in all children who took part in the project and evidence of a link between creativity and drawing and writing.

Over 7,000 children and 318 schools across the UK took part in the Power of Pictures in Scotland, Wales, Northern Ireland and England, involving award-winning illustrators including Chris Haughton, Viviane Schwarz, Alexis Deacon, Tim Hopgood, Mini Grey, Ed Vere and Ken Wilson-Max. Picture books on the programme included: Croc and Bird, Is there a dog in this book?, Ssh! We Have a Plan, Grandad’s Island and Wild.

Teachers involved reported not only better outcomes, increased writing and reading skills and children who were really excited about learning, but also that teachers felt more confident and happier. Teachers reported pupils increased confidence in expressing and understanding and a willingness to challenge ideas through the work with picture books and illustrators. They also saw an increase in vocabulary and language and developing deeper comprehension skills.

Vinny Dawson, teacher at Harrow Gate Academy which took part in the project commented, ‘The Power Of Pictures has not only developed my career immensely, but the effect it has on pupils is unmeasurable. Even the most reluctant pupils began to find writing and reading pleasurable and rewarding. Examples of the most beautiful, thought-provoking and astonishing pieces of learning were produced as a result of the programme. I highly recommend the POP programme and its benefits to anyone and any school looking for an effective way to enhance their English curriculum.’

The research revealed that when children are given the opportunities to draw as part of the writing process, this helps them develop and extend ideas for writing, making their independent, self-initiated writing much richer.

The findings also revealed that picture books are an important genre of children’s literature and not just a step on the route to chapter books.

Lauren Child, former Children’s Laureate and creator of Charlie and Lola and Clarice Bean has supported the project since the beginning. Lauren says, ‘There’s not enough understanding of how sophisticated picture books can be. If we don’t understand that, then we don’t understand how amazingly sophisticated children are and that they think very deeply and powerfully about things. And we do them a disservice if we don’t see this.’

About the Power of Pictures

CLPE launched the Power of Pictures project in 2014. It was developed by CLPE’s Charlotte Hacking and the award-winning illustrator Ed Vere who initially put together a course designed to help teachers use picture books, understand the process that goes into developing picture books and develop meaningful relationships between authors and schools. With a grant from the Arts Council, Grants for the Arts Programme, the project evolved into a three year programme.

Charlotte Hacking, Learning and Programmes Director  at CLPE says “When we designed this programme six years ago, we had a hypothesis that using picture books and giving children the opportunity to draw as part of the writing process would support all children to become better readers and writers. Over the six years we have seen evidence of this being true time and time again for all children, including those who receive Free School Meals and those who were previously perceived as finding literacy a challenge. We are delighted that this trial has provided us with more evidence and has shown that providing opportunities for this kind of work in the English curriculum is essential to allow all pupils to thrive.”

Ed Vere says "Nearly all children love drawing when they begin primary education, and most have lost confidence in it by the time they leave. They come to believe there’s a right and wrong way. There isn’t. In losing drawing, they lose a vital form of self-expression in an age when mental health issues are rife. We cannot afford to squander these innate tools which, if allowed to develop, help us understand ourselves as we navigate the world.

"A huge aspect of ‘Power of Pictures’ is about giving teachers the understanding and confidence of how and why to use drawing and to actually draw themselves. Many haven’t drawn since they lost their confidence in it at 7 or 8. That loss of confidence is often passed on. We aim to break that cycle.
Drawing is thinking. Drawing allows ideas to start growing inside a child's head before they've written a single word."

"Education in this country works well for children who are academically minded – and terribly for those who think in other ways. Those who are equally bright, but think visually, or spatially.
By allowing drawing into the process of creative writing ‘Power of Pictures’ stops leaving those children behind. The difference to their educational outcomes is radically improved."

CLPE’s Chief Executive  Louise Johns-Shepherd says, "This project grew out of a passion here at CLPE for ensuring every child has access to the best possible literacy teaching and a passion for picture books and their importance to all children’s developing literacy.  We are delighted that the research evidence shows what teachers have been telling us for many years; Picture Books, creativity and drawing are key factors in ensuring all children develop the literacy skills they need to become lifelong readers and writers. We are grateful for the support throughout its 6 year lifespan from many people and organisations in education, the arts and literary world and by hundreds of teachers and thousands of pupils."

Join us for our next Power of Pictures training with Ed Vere - find out more.

Read the full report from the RSA/EEF here.

Read CLPE's evaluation of the six years of Power of Pictures here.