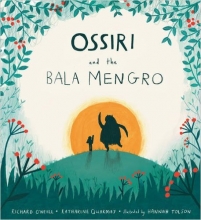 Ossiri’s family is adept at recycling to support themselves. Her love of music leads her to fashion her own instrument using these skills and she creates what she calls a Tattin Django. The sounds she makes with it are not pleasing to the ears of her community at first but Ossiri perseveres and her music awakes the ogre known as the Bala Mengro, with unexpected consequences. Romani storyteller Richard O’Neill has worked with writer Katharine Quarmby and illustrator Hannah Tolson to create this picture book which draws deeply on Traveller cultures and lifestyles.