Falling Out of the Sky. Poems about Myths and Monsters, Corebooks 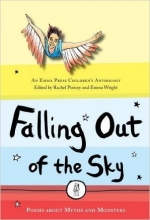 Falling Out of the Sky. Poems about Myths and Monsters

By Piercey, Rachel and Wright, Emma
Published by Emma Press

This anthology brings together new poems inspired by myths, legends and folk tales. Many focus on classical Greek myths, such as Echo and Narcissus, Arachne, Apollo, Prometheus, Pandora and Persephone, with the Minotaur and Medusa making several appearances (in one instance together!). Norse myths are present in Rachel Piercey’s ‘To Asgard!’ and a note (a useful feature throughout the book) cross references readers to ‘Ginnungagap’, Richard O’Brien’s poem about Norse god Loki the trickster. A variety of traditional tales provide inspiration, including a Cornish legend, St Francis of Assisi, Aztec gods, Welsh witch Ceridwen and Ginny Green Teeth who lurks in the water dragging the unsuspecting to their doom. Several poets make skilful use of anachronism to give their writing a contemporary relevance: in Mary Anne Clark’s ‘Persephone’s Return’ Demeter waits at the airport for Arrivals from Hades, while Harry Man speaks in the voice of the Witch from Hansel and Gretel as she shows us round her country abode with its sugar window panes instead of ‘typical double-glazing.’ A book challenges in a way few anthologies for children do.