Arthur and the Golden Rope, Corebooks 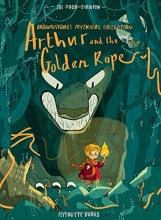 Arthur Brownstone often ventures from the small Icelandic town where he was born into the nearby forest where his curiosity leads him to collect objects and forge friendships that will later be useful to him. One day a huge wolf extinguishes the fire that gives out essential warmth. The local wise woman Atrix advises that the only way to relight it entails someone brave enough to voyage to the land of the Viking gods. So our unlikely hero sets out, his adventures delineated using playful imagery in this graphic novel. He meets mighty Thor who enlists Arthur’s help to defeat the wolf whose identity is revealed to be Fenrir, son of Loki. The story is framed by commentary from a Professor Brownstone who is a descendant of Arthur’s and there is a strong hint that further family adventures may be in store.