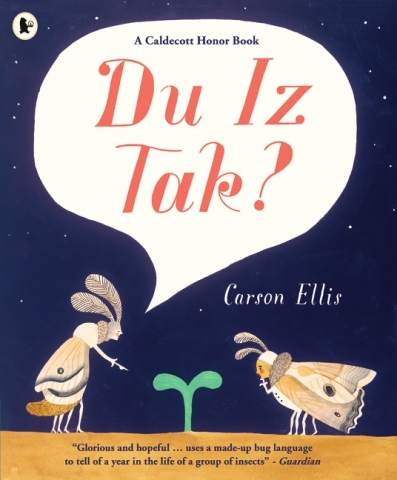 This picture book seems to be offering an engaging but uncomplicated narrative, in which a plant, as it grows from a shoot to a mature plant that flowers and sets seed, becomes the focus of attention of a group of insects who build a fort around it. Much of the charm of the book comes from the imaginatively detailed and quirky characters whose interest in the plant through the changing seasons is told with elegant simplicity, and with whom readers sympathise as their fort comes under threat. Yet the striking feature of the book is that is told entirely through direct speech by the insects, in their own insect language, which Carson Ellis has invented.

A world is created in which the illustrations delight, the narrative engages and the language provides the reader with a challenge that allows insights into their own language.