When Fantasy Meets Reality: Why I Created the Magical World of the Jinn in Nura and the Immortal Palace and the Lessons it Can Teach Us 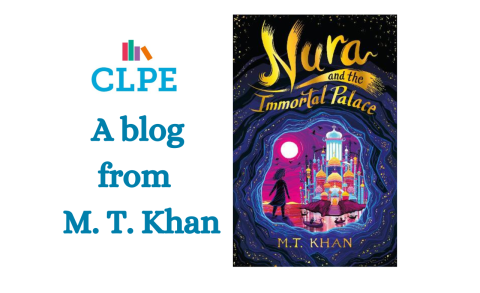 Fantasy is the genre of escape, transformation and insight. It takes us to faraway lands with extraordinary physics and unusual inhabitants. Fantasy, for many young readers, is a safe space to explore the subconscious – although things may seem imaginary, much of the story is rooted in reality and the problems we face in our day-to-day lives.

This was my goal in creating the realm of jinn within my debut novel, Nura and the Immortal Palace – a dimension that lies between the human and divine, enchanting yet treacherous, and full of the trickster beings commonly found in Islamic beliefs. The realm of jinn is a mirror to our human world: beautiful and glittering on the surface, pretty at certain angles and positions, but the truth is almost always darker.

The protagonist of Nura and the Immortal Palace, 12-year-old Nura, is an ambitious, determined and spunky kid with a craving for sweets. Lured into a luxury jinn hotel, Nura is instantly infatuated by its opulence. Except what lies beneath all that glamour is the labour of children – not unlike Nura’s own situation back home. Her two realities combine in a horrific epiphany: after a certain point, wealth can only be obtained through dirty money.

Just like the real world, the jinn in this strange realm are swindlers, out to make profit at the expense of others. They bait kids like Nura with innocent desires of candy and plush beds, but demand much more in return. It’s the same case we see in poverty-stricken areas where child labour is common: families are forced to push their kids to work, because how else will they afford food without their combined salaries?

Child labour is a heavy topic, with horrific details and disappointing revelations. When I decided to write a children’s book that discussed the cycle of poverty and challenges child labourers faced, I knew I didn’t want it to feel hopeless. I still wanted to give these kids, these forgotten, bleak kids, an adventure they deserved. That’s why I threw them into the realm of jinn and its captivating hijinks, while at the same time discussing capitalism, pitting the poor against each other, and the importance of education.

Without feeling preached to, fantasy realms provide us that glance into darker discussions without plunging us into an abyss. Fantasy holds our hand, shows us the mirror to that alternate reality, and asks us what we think about it. It’s a lesson without being a lecture, a question without being a demand, and a looking glass into what could be. Sometimes it’s the creatures that are symbols, other times the analogy comes from the setting – creepy or dreamlike. When we see our problems reflected through a lens of magic and twists, we’re not only served a delicious story, but a conversation about our own reality. Next time you pick up a fantasy novel, you might find it more relatable than you expected.