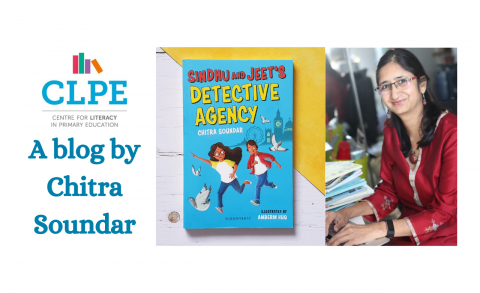 I’ve always been an avid reader of mysteries growing up. Like most children in primary school, I liked to solve the mystery or the puzzle before the story unfolds. That continues into my adulthood – I love reading mysteries, shows that need you to observe, note the details and ta-da, figure out the answer. When I started reading mysteries as a young girl, I not only read all the series books that featured mysteries, but I sought after short stories with unexpected endings, a twist in the tale, a surprise at the end.

When the opportunity to arose to write Sindhu and Jeet’s Detective Agency, I decided they must be three short stories, so even the least confident of readers will at least try and finish one of the stories in a sitting. Then I wanted Sindhu and Jeet to bring a bit of India into the stories. Just like I was totally fascinated with Nancy Drew going to Hawaii, I wanted young readers to discover new things while also reading a fast-paced mystery.

The stories have many connections to me. This is not at all surprising. Every book I write has a little bit of me. But I deliberately chose places I have been to, on both sides of the world and things that fascinate me about these places.

The first story All Aboard starts in Chennai, my home city. It’s set in Chennai’s International airport where I’ve spent many dark mornings, waiting for my flight that leaves before 6 am. I’ve been Sindhu, observing things and wondering about mysteries that don’t exist anywhere else but in my head and I’ve been Jeet, excited about coming to London. During the chase that happens in the airport (spoiler alert!), Sindhu and Jeet use their kabaddi techniques to escape from the villains. Do you know what kabaddi is? It’s an ancient Indian sport played in Indian villages, especially in South India. It requires immense concentration, quick reflex, very good breathing because you have to chant as you play. And many people make up really funny lyrics to their chants to goad the other team.

If you’re reading the first story in your class, I’d invite you to find out more about Kabaddi, a sport your class might not have heard of. And perhaps even get your school PE teacher involved in trying to play it in your school. As a non-fiction activity, invite your class to research other sports people play in different parts of the world. Here is some help. Kho-Kho is referenced in this article and is a fun one to play. We all had to play this one, growing up in India.

Here is a great video that explains the game!

Then the second story, Building Bridges brings you to my current city – London and in specific to Tower Bridge. If you’ve been to Tower Bridge, then you will see that the pavements leading to the bridge have names of people who worked on the bridge a long time ago. I often stand to read names, looking for an Indian name. While I didn’t find one on the inlaid stones, I did find one during my research on Tower Bridge’s website. Keshavji Shamji Budhbhatti arrived in England in 1885 to study in Windsor. When he worked on Tower Bridge, he travelled from Kentish Town in North London to all the way to the Tower of London. He returned home to India, ten years later, and worked on many Indian bridges. This always makes me wonder how many others who came from other parts of the British empire to work on this bridge and what happened to them?

When I read this story in classrooms I ask the children to imagine a character, a young man who might have worked on the bridge. They could have been from another part of the UK or from anywhere in the British Empire. How was his life? Perhaps he witnesses a crime he must solve? Here is some help with the history to create the story. You can also read Dodger by Terry Pratchett to support the history you’re reading.

The third story in this book, A Hard Shell to Crack, takes you to the Natural History Museum, which is a fascinating place in so many ways. I go there to see giraffes, little bird displays and ancient Indian shells.

So, it goes without saying, this story revolves around a special type of conch, a spirally shell, the valampuri sangu, which is a holy object in Hindu epics. But the shell as a biological object is unique to the Indian ocean and is rare. Sindhu and Jeet chase down and find a fraudster who couldn’t hoodwink Sindhu’s mum. Her expert eye helped tracked down a criminal with Sindhu and Jeet’s help.

This is a perfect springboard into researching this special conch – and understanding why this was unique. Biology and Religious Education in one activity – how time-saving is that? But don’t stop there. Find out the significance of other ocean treasures to different cultures. What about treasures from under the earth? From geography to natural history to RE, this story can lead you to wonderful projects in your classroom.

Sindhu and Jeet’s Detective Agency contains three fun-sized mysteries to read. But it also invites the reader to explore the details unravelling a whole term of learning in your classrooms. Find more resources and activities here.