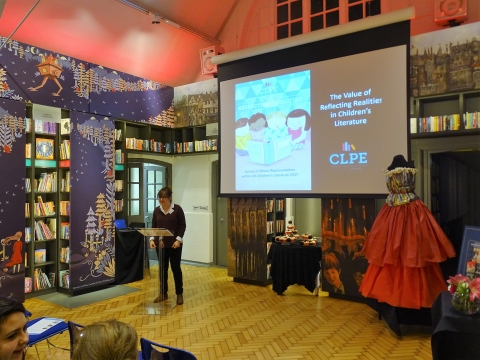 On Thursday 6th December, the CLPE hosted its second Chartered College Network Teacher Twilight of the year based on our landmark 2017 Reflecting Realities survey. This report was the first of its kind to examine ethnic representation in UK children’s literature and attracted immense attention from across the publishing and education sectors. It has continued to stimulate debate into the importance of diversity and inclusion in UK children’s publishing.

Thursday’s event showcased the invaluable work of teachers and authors in this area of work since the report’s release, and welcomed award-winning children’s author and screenwriter Catherine Johnson alongside English Lead Rosie Chapleo from Netley Primary School, to discuss their work and how this resonates with the central principles that underpin CLPE’s research.

The first speaker of the night was CLPE Regional Programme Leader Farrah Serroukh, who introduced Reflecting Realities, explained the rationale behind it and why such a survey was crucially needed in today’s socio-political and literary climate. Farrah drew attention to the limited and dated number of children’s titles in circulation which reflected the range and complexity of multicultural life for British school children. Foregrounding and unpacking the survey’s statistics for publishers has helped highlight that higher quality and more holistic representations of BAME identities are needed - ones specific to a British context.

“We deserve more as readers, we make up a massive share of the market and we deserve to see ourselves reflected. Better quality representation leads to better quality choices, better reading experiences and better outcomes for all.”

Also discussed were initiatives around more inclusive books which have gained momentum based on the report’s call to action. The findings have helped support the work of children’s publishers such as KnightsOf and inclusive booksellers like LetterBox Library, who were also present on the night to launch their widely anticipated Reflecting Realities bookpack that was curated in partnership with the CLPE.

Farrah rounded up by prompting a teacher discussion, asking the room to consider where they stock their books from and how much consideration is given to the content and the extent to which this reflects the realities of their school community and wider society. She ended announcing the CLPE’s plan to carry out the survey year on year to ‘keep it in the public consciousness’.

English Lead Rosie Chapleo from Netley Primary School – a rights respecting United Nations school in Camden - was welcomed to speak next about how gender and ethnic representation is being understood and addressed by her pupils. As part of a Year 6-led project inspired by the school’s exhibition the ‘Magic of Books’, students were taken to Camden Library to look at diversity in children’s books. Once they realised many of their favourite books didn’t feature a variety of characters or identities, they felt compelled to act. Reaching out to publishers and authors by writing letters, the children asked for more books with the kinds of characters they wanted to see, including more women of colour. This inspirational example highlighted how teachers can contribute to creating inclusive and active reading cultures in their school, prompting children to pursue their reading tastes.

Finally, guests heard from award-winning author Catherine Johnson, whose 25th anniversary as a writer was celebrated at the CLPE. Catherine’s talk explained the impact of her growing up in multicultural London, her career development as a writer of historical fiction and how her work tries to remedy the lack of black representation in British history. Her novels such as The Curious Tale of the Lady Caraboo, Sawbones and Blade and Bone were discussed as ways for young people of colour to be able to access narratives that validate and orient their histories in a wider context.

Guests were excited to hear about Catherine’s writing journey, and many had a chance to buy and sign copies of her work.

“There are so many of these stories to tell. This is why I’m still here.”

There are five further Chartered College Teacher Twilight sessions at the CLPE planned for the rest of this academic year. Tickets are £5 including a glass of wine or soft drink. Find out more about all of our events...