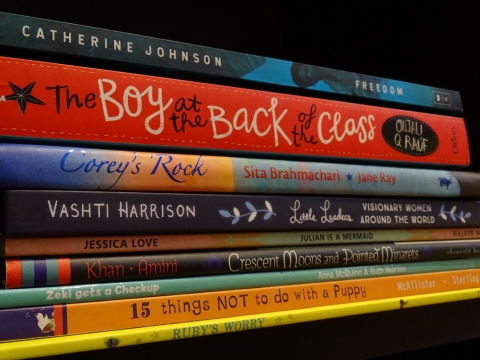 The figures in our 2019 Reflecting Realities Report indicate an improvement in the proportion of ethnic minority characters featured in children’s books compared to those published in 2018. 7% of the children’s books published in 2018 featured BAME characters, up from 4% in 2017. 4% of the children’s books published in the UK in 2018 had a BAME main character, up from 1% in 2017. This is undoubtedly a positive step in the right direction. The willing participation of the publishing industry and the upward shift in the representative numbers are all positive indicators that stakeholders are committed to redressing the imbalance. This is crucial and important and indicates that future years will show a positive increase in ethnic minority presence.

However, we would encourage stakeholders to view the slight increase with caution. The core purpose of CLPE’s work is not solely to redress the imbalance and encourage an increase in the volume of books featuring BAME presence. The other key aim is to encourage quality portrayals and presence. Quantity alone will not suffice, particularly if the quality is poor or, worse still, problematic.

One of the notable patterns when we were analysing the submissions for this round of the report was the fact that it was often the case that characters from BAME backgrounds in the submitted books were less well drawn than equivalent white characters, both in terms of actual illustration and in terms of character development.

For example, there were a significant number of books submitted where characters were drawn with exaggerated features that amplified their ethnicity in a way that reduced them to caricatures. We observed instances of colourism, in which there was a direct correlation with the skin tone and the virtue of a character. The more virtuous the character, the lighter their complexion and vice versa.

We did receive a number of books in this cycle where characters from BAME backgrounds were underdeveloped, falling victim to lazy typecasting that at times veered towards negative stereotyping and problematic portrayals.

There are obviously many different styles of illustration and illustrators are artists who will want to bring their own flair and style to any book. However, when commissioning books with illustrations of human characters it is important to give due consideration to capturing the distinctive and varied details, features and qualities that convey the unique essence of an individual in a respectful and authentic way.

Anna McQuinn’s Zeki Gets a Check-up (AlannaMax), illustrated by Ruth Hearson, which was submitted in this cycle, is a beautiful example of this. Ruth treats her subject matter with real love and affection, breathing life into each character through careful consideration about hair texture, facial features and skin tones, resulting in illustrations that are relatable and exude life and vibrancy.

Readers are more likely to connect with well-drawn, well-developed and well-rounded characters and their ethnicity doesn’t necessarily need to define them any more than a white protagonist is defined by theirs. Sita Brahmachari’s Corey’s Rock (Otter-Barry Books), illustrated by Jane Ray, is a touching story that deals with the universal themes of love, loss and bereavement in a tender, sensitive and moving way. Although moments in the text do address race, this is only ever appropriate to the plot, and the fact that the story is based on a mixed race family does not define or become the overarching focus of the narrative.

Some of the historical fiction and non-fiction titles submitted in this round of the survey featured portrayals of BAME figures which were oversimplified, inaccurate or problematic. Subject matter relating to content about ‘explorers’, for example, skimmed over the more contentious part of the historical facts, either resulting in misrepresentation or total negation of lived experiences. We accept that it can be challenging to condense complex and mature subject matter into child-friendly language and formats. However, if a publisher chooses to produce a book about a historical subject, theme, era or figure for young readers, there is a responsibility to ensure that the subject matter is well-researched and handled with due care and consideration out of respect for the subject and the reader.

Catherine Johnson’s Freedom (Scholastic) is a prime example of good practice in this area. Her respect for the discipline of historical enquiry and her chosen subject matter are evident in every moment of Freedom. Her careful and extensive research, combined with her passion and commitment to creating well-developed, well-drawn, and nuanced characters set against authentic historical backdrops, elevates both the historical subject matter and the reader.

We hope that this year’s report will be supportive to those creating, choosing and sharing children’s books.  The heart of this research is driven by the desire to improve quality ethnic minority presence and representation in children’s literature, with the hope that readers ‘see’ themselves and others as equally entitled to occupy the literary space. We have provided more detailed analysis and many more examples of good practice in the report, we hope it is useful.