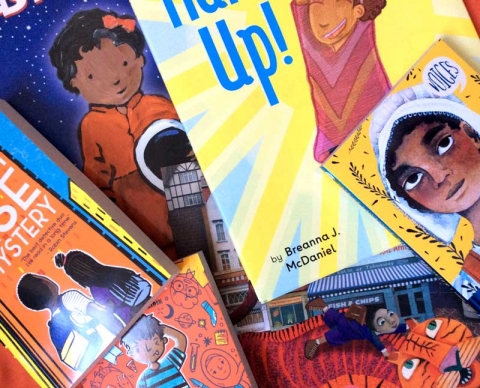 CLPE’s Reflecting Realities reports are a gift. The book industry’s failure to reflect the lives of all of its potential young readers (to reflect authentically, to reflect at all) is not new. The work of so very many organisations to challenge this is not new. Their insistence on a hungry market for inclusive books and for authentically inclusive books is ages old. But now, after decades of coming up against sullen and resistant cries of, “but where is your proof?”, the CLPE's Reflecting Realities reports have gifted the evidence. The cries have now been mostly stilled, the urgency to address under-representation now much more widely shared.

The House of Mirrors

The sharp findings of the Reflecting Realities reports is that most white children are still growing up in a house of mirrors with books offering up only slightly altered replicas of themselves, and rarely visions of the world they encounter when they step outside (whether that be the communities they are growing up in, or the communities they witness in other forms of popular culture). Meantime, vast numbers of BAME children never see their lives reflected in the literature they have access to - or, if they do, they will often see themselves only via lazy clichés of their identities or pushed away from the narrative’s main action...as a sidekick or as a speck in a ‘multicultural’ crowd. Or, at times, as a version of themselves that even they struggle to recognise such as when depicted through an obscure shade of orange. The ‘Degrees of Erasure’ framework featured in the 2019 Reflecting Realities report explores how BAME identities are being made absent in this way.

The release of CLPE's 2019 Reflecting Realities report gave us the numbers. It told us that while 33.1% of school children in the UK are BAME, only 4% of children’s books represented BAME main characters. But, in its ‘Reflecting on Content’ section, it also importantly gave us all a wonderful, new lexicon which succinctly and expertly describes some of the problems which have been plaguing the children’s literary world for some time when it comes to BAME representations. Something to go beyond quantity and to look at the quality of representation too.

At Letterbox Library, we have a reputation for our stringent selection process when curating our bookpacks for schools. It is a process through which we don’t just continually seek out texts showing under-represented communities but also through which we carefully vet those representations for quality. For us too, it was never about the numbers. Degrees of presence, authentic and thoughtful characterisations, credible narrative voices- these are all considerations for us. All of the books which publishers send to us go through an initial sifting. They then go off in the pigeon post to our team of 25 volunteer reviewers, also known as Our Very Backbone. Our reviewers offer us a diverse skills set, but are largely educational professionals (teachers, librarians, consultants) who also identify across a range of BAME identities (10 of the current 25 reviewers identify as people of colour). Each of the books we send out receives 3 reviews and from these, decisions are made about what we will and won’t sell. Currently we reject somewhere between 65 and 70% of all of the titles we see.

We Need To Talk About The Lists…

Letterbox Library has been sourcing selecting, curating and stocking diverse and inclusive children’s books since 1982. This history means that we have witnessed different literacy needs emerge with new communities and we have also tracked and responded to the shifting discussions around identity. This ever-evolving knowledge is key: as educators and book selectors and sellers, our understanding of what constitutes an inclusive book must be flexible and energetic. A book considered a ‘positive’ or authentic portrayal 15 years ago may, in 2019, seem laboured or problematic. A tip: beware the lure and promise of The Multicultural (or BAME or PoC) Booklist. Triple check those online sources and the date of the sourcing. 'The Multicultural Booklist' risks resembling an old-fashioned larder, with items which are out of date, or which have gone rusty and lost their shine or which are, quite simply, no longer wanted. As with any list, there is a risk there will be out of print titles. But with 'The Multicultural Booklist' there are added pitfalls such as dated portrayals, representations which are no longer relatable, characterisations which no longer hold a badge of authenticity, ‘classics’ which only appeal to the selecting adults’ nostalgia - as well as absolute errors of judgement. Reflecting Realities must be just that; we need to honour children’s lives by handing them identifiable, relevant landscapes…

Last year we had the joy of co-curating a Reflecting Realities Primary Schools Bookpack with the CLPE. The CLPE reports gave a framework and a language for so many of our concerns - and it also reignited our work. So, building on our existing bookpack collections (which includes Disabilities and LGBT- inclusive packs), we decided to bring together some of our reviewers’ favourite BAME-led stories (until then we has only listed individual titles on our website) into a new Reflecting Realities Bookpack. The careful compilation has been informed by our reviewers, the CLPE report and the wise presence of CLPE's Farrah Serroukh. It has been fed by cake. The selection stays ‘alive’ with swaps and substitutions and additions informed by a flurry of emails and meetings. The chosen books are weighted towards contemporary and recent narratives and are also often by UK BAME creators. What unites these stories is that they are all have a BAME protagonist who sits easily and snugly in their identity and who is busy getting on with propelling, leading and making their own stories.

Letterbox Library is a key supplier of inclusive children’s books to the education sector, libraries and families. It specialises in finding and supplying books in which all children can see themselves and which reflect the world community in all of its diversity.

In this installment of the Reflecting Realities blog series, Letterbox Library’s Dr. Fen Coles, who participated in the CLPE’s research into ethnic diversity in UK Children's Literature as a member of the Reflecting Realities steering group, explores why conversations around ethnicity and representation in children's books are so crucially needed, and how the reports have helped change the nature of debate in the area.

Learn about the services Letterbox Library can offer your school

And don't forget to read the Reflecting Realities report in full.