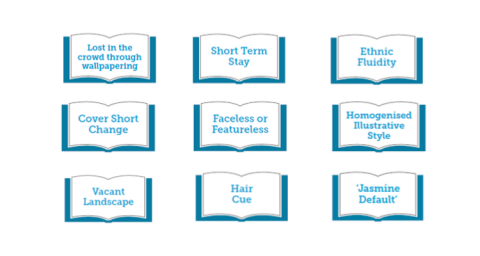 Our Reflecting Realities Report published in September 2019 showed an increase in the numbers of books featuring BAME characters compared to previous years. This implies a higher visibility of ethnic minority characters and these efforts to improve the volume of presence are commendable.

However, because our survey looks at content as well as numbers, the increase does mask a worrying phenomenon. In the process of reviewing the submitted titles, we were really struck by the range of ways in which BAME characters were effectively presented as “visibly invisible”. Encountering repeated instances in which the presence of BAME characters was diminished led us to develop a way of categorising these practices.

Each term has been created to convey the type of erasure observed in titles reviewed in both cycles of this study. Definitions have been provided in an attempt to help those involved in the creative and editorial processes discuss these issues in the future.

This relates to titles in which the story was located in a country outside of the UK and in which the lack of people featured in the illustration suggested a lack of population or presence. Such spreads and titles could potentially lead the reader to infer that such spaces were under-developed, barren or primitive.

This refers to instances where it was evident that the scene was located in a specific part of the world outside of the UK but the characters present were exclusively or predominantly white, rendering the indigenous population invisible. For example, portrayals of countries in the African continent where readers encounter exclusively white characters on safari or books located in countries like Australia and Canada which are void of the presence of any indigenous populations and again exclusively featured white characters.

Lost in the crowd through wallpapering

‘Wallpapering’ is a shorthand term we developed to describe a style of illustration where the background is densely populated or at least featured a number of background characters. A repeat pattern achieved by intermittently colouring in characters either black or brown to the extent that it almost resembled a wallpaper effect, often resulted in minority characters blending in so much so that they became lost in the crowd. This is fine in principle if everyone is getting lost in a generic crowd but we had repeated incidences of books being submitted as representative of BAME people where this was their only presence in the book – in such cases this could be interpreted as a form of relegation.

This is a term devised to describe books we received in which BAME characters were only featured on front covers, conveying the promise of presence within the body of the narrative, only for the reader to open the book and find that the cover is the only place where the character is visible.

This is an extension of the idea of ‘cover short change.’ It describes instances in which BAME characters are introduced at the beginning of the book but are either written out very quickly or never mentioned again in the text. In the most extreme case in this cycle of submissions, a BAME character disappeared as early as page three and failed to reappear thereafter.

This is a term that describes instances in which the ethnicity of the illustrated character varies from spread to spread therefore making the ethnicity indistinguishable and undefinable. It is one thing for this to be an artistic choice and something that adds to the story or narrative but quite another if the title is being submitted as part of a review process that is determining the quality of ethnic minority representation.

Hair cue relates to instances where the only point of reference that might suggest that the character was from an ethnic minority background was the description of their hair, specifically as either ‘wavy or ‘curly.’ Again, given the nature of this study, such cues alone are a tenuous and insufficient reason for submission to a survey on representation.

We acknowledge that there will be multiple reasons as to why a character may resonate with a reader and ethnicity forms only one of those reasons. That said, we experienced a disproportionately high number of female characters named ‘Jasmine.’ The name was, in many instances, the only cue available to suggest that the character was from an ethnic minority background and therefore appears to be the reason the book was submitted for the survey. The name is commonly used across cultures and does not necessarily denote one particular ethnic minority group, community or culture, and if this is the only cue available then we would question the validity of such submissions.

This style of illustration, in which characters’ faces are featureless, is a valid artistic choice. However, within the context of this study, it made the processing of the books and the identification of ethnic minority presence challenging. The nature of such an illustration style creates a homogeneity that eliminates the ability to categorise ethnicity. Such a choice undermines the validity of the submitted title in terms of it being recognised as an example of representative and inclusive literature, particularly if such a portrayal is the only indicator of ethnic minority presence in the book.

Homogenised illustrative styles that were evident in some submitted titles made it difficult to identify ethnic minority presence, rendering the title in a number of cases as invalid for the purposes of this study.

This survey has raised important questions for us about what constitutes valid, appropriate and quality presence. If the number of BAME characters in children’s books is proportionately less than white characters and animal characters then there is a greater weight of expectation on inclusive titles to ensure that the portrayal and inclusion of minoritised characters is clear, meaningful and well done. We offer the categories above and the more detailed analysis in the report as a way of discussing and talking about these issues and we hope that this proves useful.

Read more about Reflecting Realities, and books that showcase a range of narratives and experiences in this blog by CLPE's Farrah Serroukh