Q&A with Tony Bradman all about Viking Boy: The Real Story 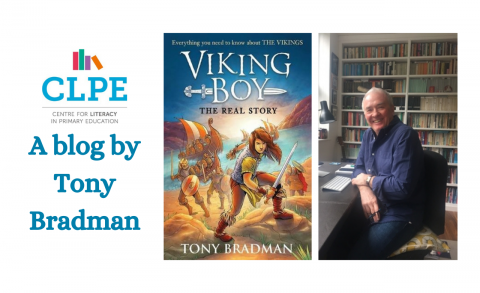 What inspired you to write Viking Boy: The Real Story?

My novel Viking Boy was published in 2012, and it soon became clear that teachers were finding it very useful to help them teach children about the Vikings – it’s part of the Primary History curriculum. I’ve always been a fan of Viking stories and culture, but I did a lot more research when I was writing Viking Boy. So although it’s got fantasy elements from the Norse myths, the overall culture of the book has a real historical basis. Over the years since, I’ve done lots of school visits (and recently Zoom calls!) in which I’ve talked about the novel, and Viking culture in general, and I began to think that I should do a book that covered the facts as a companion to Viking Boy. Then my publisher suggested that we give Gunnar, the central character of Viking Boy, the job of being the narrator for the new book. I loved that idea – it was very exciting to write from his point of view, and bring in other characters from the story. It was also great to have an excuse to do even more research into the Vikings (not that I really need one!).

How would you suggest primary school teachers use this book?

All the primary teachers I’ve met on my visits and Zoom calls are brilliant at coming up with creative ways of helping children to learn about the Vikings, so I hope that they’ll find Viking Boy: The Real Story a useful extra resource. When I was planning and writing the book, I thought very carefully about all the things I’d wanted to know about the Vikings when I first became interested in them: where they came from, what they believed and did, what they looked like. I’d always been fascinated by their courage and optimism – the Vikings were intrepid explorers, and were very practical – both women and men. Of course, they were amazing warriors, but they were storytellers and poets, and there’s also a darkness to their religion and myths that is very compelling. I’m hoping teachers will use the book to give children a more rounded view of the Vikings – and also that both teachers and children will be entertained by it!

I was inspired to become a reader by my primary school teacher Mr Smith. He read my class a book in our last year at the school that I found utterly gripping – I couldn’t wait to find out what happened next! That turned me into a reader – I read other books by the same writer, and before long I was an obsessive reader, visiting the library as often as I could and spending all my money on books. By my mid-teens I’d pretty much decided that I wanted to be a writer – it wasn’t easy, it took a while, and being a writer isn’t always plain sailing – but I wouldn’t want to do anything else. (And yes, I’m keeping you in suspense about that book – you’ll have to keep reading if you want to know what it was!)

When I started out in children’s books, I wrote poetry and picture book texts, and I was a reviewer too – so I was constantly reading the amazing books of the 1980s and 1990s to my children, e.g. picture books by Shirley Hughes, Janet and Allan Ahlberg, Helen Oxenbury and John Burningham, and poetry by Allan Ahlberg, Michael Rosen and Roger McGough, and they all had an influence on my work for younger children. It wasn’t until later in my career that I started writing fiction for older children, and I think you can see the influence of my early reading – I was always a fan of Rosemary Sutcliff, a wonderful writer of historical fiction, particularly her books The Eagle of the Ninth, Warrior Scarlet, Dawn Wind and Blood Feud. I also read Henry Treece’s books obsessively – he was a great writer of Viking stories. I still have a copy of the Puffin edition of Horned Helmet – I remember buying it when I was about 11, and absolutely loving the hard edges of its Viking prose, the laconic Viking dialogue and the brilliant, dark and terrifying illustrations by Charles Keeping. The whole thing burned into my mind and helped to make me the writer I am.

So here’s the big reveal… The book Mr Smith read my class was The Hobbit, and it was only many years later that I discovered how much the story of Bilbo’s quest owes to the Vikings and the Norse myths, J.R.R. Tolkien of course being an expert on such matters. The Lord of the Rings trilogy feels like a Viking story too, so I think we can thank them for that as well. I certainly thank them for turning me into a writer!