Q&A with Peter Bunzl all about Magicborn 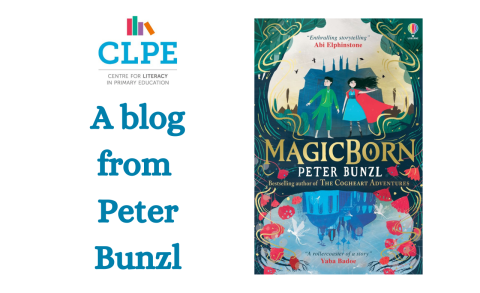 What inspired you to write this book?

I love fairy tales and history, and I wanted to write a story that combined the two. One day, when doing a school event at Kensington Palace, I was taken to see an amazing mural painted in 1726 by William Kent for King George I.

There are forty-five people in the painting and it is believed to show George I’s favourite servants and courtiers. I was intrigued by all those characters in their amazing outfits, especially the children. I thought: what if those children could do magic and that was the reason they were brought to Kensington Palace to meet the king? That one idea sparked my story.

There are lots of fantastic learning opportunities to be had while reading Magicborn. You could cover topics such as:

Georgian history. What was life like for children in the court of King George I? Art, knowledge and creativity flourished in those times, but there was also suffering and poverty. Many children had no schooling and had to work to survive, while the upper classes lived a life of luxury and grew rich from the profits of slavery.

Fairy tales. What makes a good fairy tale? The storytelling voice, the archetypal characters, the traditional settings? Get students to think about fairy tales they’ve read, and how they could turn the elements in these around or transform them to make a unique fairy tale of their own.

Magic. The spells in my book are simple poems spoken aloud. Ask your class to make up their own spell-poems, and read them out in a spell-casting session.

I always enjoyed creating stories. As a kid I wrote and drew my own picture books and comics which I shared with my family and friends. I used to be a professional animator before I became a writer, and I adore both animation and writing. Both processes are about bringing characters to life through craft and hard work, and both are very time-consuming ways to tell stories!

During my animation career I worked on a lot of projects for other people, but I longed to create my own characters and send them off on their own big adventures. About ten years ago, I started to write seriously for myself, first screenplays, then prose fiction, then children’s books, which I always loved. One of those books sold and became Cogheart, my first published children’s novel.

The great thing about children’s books is that the story can be anything and everything you can imagine. Things from your wildest childhood dreams. Things that would be impossibly expensive to put on film, and too wild for adult books.

The personal history of people from the past intrigues me. Their wants and needs, their blind spots and prejudices. That kind of history holds a mirror up to us now. Have people and our societies changed and improved? Or is human nature always the same?

Fantasy and human invention also interest me. My series The Cogheart Adventures riffs on the idea: What if the Victorians had managed to make mechanical automatons with personalities and feelings?

To write a good story you need a good what if? One that takes something that is, or was, and pushes it somewhere magical and fantastic, into the realms of fiction.

As a child I loved books about magic. It’s the main reason I wanted to write a magical story myself. Some of my favourites were:

The Chronicles of Narnia by C. S. Lewis, especially The Lion, The Witch and The Wardrobe and The Magician’s Nephew, which I love for their creative uniqueness.

The Sword in The Stone by T. H. White for its homely magic and animal transformations.

A Wizard of Earthsea by Ursula K. Le Guin for its mythic and legendary feel.

The Hobbit and The Lord of the Rings by J. R. R. Tolkien – bits of the latter will be stuck in my brain for ever!

Howl’s Moving Castle and Charmed Life by Diana Wynne Jones were two of my favourites. As a teen, I loved her book Fire and Hemlock. That story was inspired by the Scottish legend of Tam Lin, a fairy tale that also influenced Magicborn.

As an adult I loved Suzanna Clarke’s Jonathan Strange & Mr Norrell’, which had a big influence on the Georgian setting of Magicborn.