Q&A with Manjeet Mann all about Smalls Big Dream 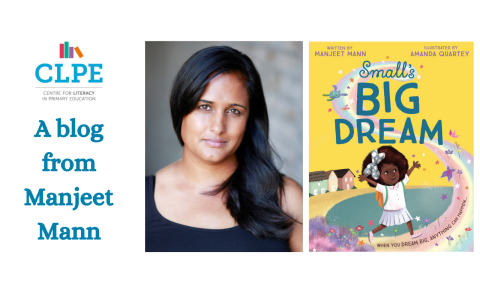 What inspired you to write Small’s Big Dream?

When I was small, I made the mistake of telling a family member my big dream. “I’m going to be an actress and a writer!” I declared proudly. “Don’t be stupid” she scoffed, “you can’t do that!” I was confused, I mean I’d recently played the role of Glinda in the year six production of The Wizard of Oz to critical acclaim. “Why?” I asked. “Because…it’s just not realistic” she said. “Not for people like us anyway, only rich people do things like that.” My family were far from rich. I was often labelled as coming from a ‘deprived background’ or as one school bully referred to me, “council house scum.” Despite the labels, I couldn’t help but continue to dream big and every time someone told me my dreams weren’t realistic, because of the way I looked or where I came from, the more determined it made me.

Now, fast forward thirty years and I’ve made it my mission, through my work, to empower and inspire others to follow their dreams. This is why I set up Run The World, a not for profit that works with women and girls from marginalised backgrounds and seeks to empower them through sport and storytelling. Too often the young girls and women look at me in disbelief when I tell them their dreams can come true. It’s not always a case of not believing in a dream, sometimes it’s almost as though they feel they don’t have the right to dream big. I want to change that.

Smalls Big Dream is very much inspired by my own story - daring to dream big despite the naysayers. It is my rallying call to arms to little people everywhere, that when you dream big, anything and everything can happen. Because, if my dreams came true so can theirs and how exciting is that!

Children often have big dreams but are too scared to acknowledge and pursue them. I think it’s important to inspire children to have the courage, confidence and certitude to dream and help them realise that they can do anything – as long as they set their mind to it and while chasing their dreams can be challenging, with setbacks and disappointments, it is also meaningful and rewarding. I think it’s important to empower and encourage children to share their hopes and dreams and as educators to recognise the importance of giving a child the right tools and space to nurture those dreams and become even bigger than the dream! Children feel empowered when they have people around them that believe in their dreams so teachers can use Smalls Big Dream as jumping off point to start these conversations about dreams and aspirations. Providing a space and environment where a child's dream is valued and supported.

I’ve always liked telling stories. But  I never thought of becoming a writer when I was a child. I started writing out of desperation really. I was only ever interested in acting – bringing someone else's world and words to life rather than my own but was starting to feel uninspired by the roles I was getting. Eventually I decided to stop moaning and do something about it, so I wrote myself a one-person play. After all, if you’re not happy with the parts you’re getting write yourself the role you’d like to play. My writing career snow balled from there. I started writing more plays, bits for TV and then in 2017 I was chosen for the Penguin WriteNow mentoring program. I like telling stories. That is my biggest motivation and I like that I get to tell them in lots of different mediums. It keeps things interesting.

My biggest influence is my own life. I mine my past and am constantly inspired by what’s going on around me socially and politically. It takes me quite a long time to settle on a subject, but I find that if the idea hasn’t left me in a year or so then it probably has legs and I should start writing!

Roald Dahl’s Boy had a lasting impact. It was probably the first autobiography I’d read and I read it multiple times. I think I was inspired by how seemingly ordinary events were made extraordinary. It’s genius. Also, Meera Syal’s Anita and Me. It was the first book I saw myself in. Words cannot express how important that book was in my house. I remember staring at the cover for ages. I couldn’t believe there was a picture of a south Asian girl on the front cover! Not only that but it was a story about a south Asian, working class girl from the Black Country. I totally saw myself in that book and my mind was blown.