Q&A with Jon Klassen, all about The Rock from the Sky 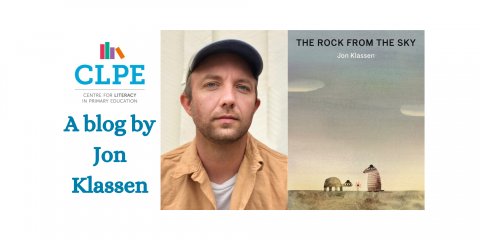 What inspired you to write The Rock from the Sky?

I like stories that look very quiet and almost boring but have something exciting in the background to engage the audience. The premise in the first story was a great version of that—but once the rock had landed, I’d found some characters I wasn’t quite done with yet, and I wanted to see what the day after a giant rock falls into your life feels like.

Take breaks between pages to discuss what you know now that that page has gone by. Where do the kids think the story is going? Dissect what information has been explicitly given, what has been just suggested, and what is assumed. The stories pay off expectations but also have things that happen out of nowhere, so go over how kids feel about what happened after talking about what they thought would happen. There are lots of connections for the audience to make, and the characters’ attitudes about the events are largely up for discussion.

What motivated you to begin a career in writing and illustrating?

I worked as a storyboarder and set designer on animated films for years, and as soon as I tried books, I realized they fit so many of my preferences and quirks as both an illustrator and storyteller. I like inferring things rather than showing them explicitly, I like to keep things simple and not overcrowd the audience’s eyes, and all of that is counter to what often happens in feature animation. It was like meeting a very old friend or something. I still feel very lucky to have found it.

What are the major influences in your work, and how do you decide on your subjects?

My major influences are pretty varied, and most of them aren’t picture books because I don’t want to rip anybody off directly (I would rather do it sneakily . . .). Because I started in film, a lot of influence comes from there—the usual people mentioned when talking about film: Stanley Kubrick, David Lynch, Alfred Hitchcock. I also look at a lot of photography: Walker Evans, William Christenberry, Joel Sternfeld, Ed Panar. For writing—I’m not as well read as I’d like to be—Cormac McCarthy was a big deal to find. I was worried that because I like drawing simple, graphic things, my work was going to be kind of emotionally stunted or cold, but reading his work showed how you can be deeply emotional and engaging because of what you’re leaving out. Other writers I go to a lot are Denis Johnson, Shirley Jackson, and Anton Chekhov. Illustration-wise I look all over the place. I really like “outsider art” or folk things. I was never formally trained in either illustrating or writing—my education was in animation, and it’s a very specific skill to learn—so I relate to work I see from people who weren’t part of a movement or who are doing things for very local reasons and kind of finding their way in the dark but still feel a very simple affection toward what they make.

I decide on my subjects pretty randomly. I’m attracted to setups where a lot of the work is done in the preparation, not on the page itself. I often find premises I like or places I’d like to make a book about, but if the characters never show up, I have to give up on them. It’s only when the characters walk out onto the page and are breathing on their own that you have a book, and that kind of decides it for you.

Arnold Lobel’s Frog and Toad books hit me hard when I was the intended age for them, and they continue to do that. In retrospect, a lot of it had to do with the fact that they are not on even ground in the relationship and Lobel never treats that as something he intends to resolve. Frog doesn’t need Toad the way that Toad needs Frog, and it drives the stories fairly often, and as a young kid you already recognize that dynamic in your own life. You had friendships like that, where you were either a Frog or a Toad in it, and it felt so rich to see it validated in such a simple format.

P. D. Eastman’s Go, Dog, Go! was another big one. What makes that book work is still very mysterious to me, but the general way he arcs it and then satisfies something at the end, even very loosely, and the simplicity of his images that prompt young readers to build whole worlds around them—I still admire it very much. Eastman’s first book, Sam and the Firefly, is so beautifully illustrated, and I’ll probably always be wanting to try to catch up to it.

Find out more about Jon's new book, The Rock from the Sky (Walker Books).

The Rock from the Sky Teaching Notes, 2021