Q&A with Annemarie Anang all about I Am Nefertiti 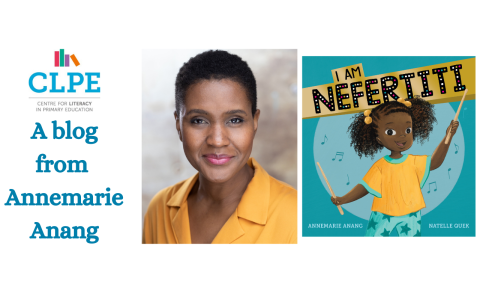 I honestly thought I’d start my writing career much later in life, perhaps in retirement sitting in a pretty cottage somewhere, but the lack of diversity in children’s books made me pick up my pen just two years ago, when my daughter was four.

When I discovered that less than 6% of children’s book creators are people of colour, and that in 2019, only 5% of children’s books had an ethnic minority main character, I thought Why has there been such little change made in the publishing industry after all these decades?.

What if these children could grow up seeing themselves reflected as the smart, hilarious or adventurous main character in books, T.V. programs and other forms of media? This would encourage self-love, acceptance, confidence and feeling like they belonged: vital for wellbeing and healthy development. And what if all children were exposed to main characters from every sort of background? Not only would they have considerably more empathy for others, but they would grow up believing that everyone belonged. How much more peaceful would the world be then?

I’m a former primary school teacher, now an actress, and I decided that I could not allow my daughter to grow up as I did, without seeing myself reflected in books and other media. So, I set out to become a children’s book creator and write books in which the main character is either black or brown, like my daughter and me.

I Am Nefertiti features a main black character, alongside a group of children from diverse backgrounds in the band. It is a story for everyone, regardless of their heritage and background; all children should read books about different kinds of children – that is how empathy can be nurtured.

What inspired you to write I Am Nefertiti?

The message of my debut children’s book I Am Nefertiti was an urgent one for children to hear – love yourself. The main character Nefertiti was named by her grandma after the great Egyptian queen Nefertiti and the name means a beautiful woman has come. Your name is a part of your identity, often associated with a meaning, history or an interesting story. Over the years, I have learnt that the effect of carelessly mispronouncing, Westernising or shortening people’s names can lower self-esteem. I want children to love their name and who they are, and to be proud of their identity. I wanted each child to celebrate the joy of being themselves.

I chose a musical setting, not just because I’m a musician, but also because it’s fun! So Nefertiti is in a band and she plays the drums like my daughter does.

How would you suggest primary teachers use I Am Nefertiti in the classroom?

I Am Nefertiti is a joyous, rhythmical read aloud so it’s great for storytime. The book can be used for classroom discussions around themes of identity and self-confidence, friendship, peer support, and belonging. It can also be an exploration of world instruments and all their different sounds.

Through role-play games, teachers can encourage children to embrace their name and identity, and to celebrate the joy of being themselves. Talk about what makes each child unique and what they have in common with others, what makes them feel like they belong. Ask the children to affirm themselves each morning by saying: “I am _________  [their name]!” before class begins, and also during the day when they need a boost of confidence. Also teach them to whisper it to themselves when they have challenging task to do or when they have achieved something wonderful.

With its diverse cast of characters and an eclectic range of musical instruments, I Am Nefertiti celebrates the joy of making music together. Teachers can engage children in music-making sessions, exploring the sounds of instruments from around the world, their origins and how they sound when played individually and together as an ensemble. Children can clap to a beat, varying in tempo and volume, and can also access a singalong to the Nefertiti Keeps the Beat song with lyrics, available on my website. Teachers can also share about how music makes us feel.

The educators’ guide and video resources include an ‘all about me’ activity, videos of the individual instruments, a song, and a resource sheet about the band instruments from around the world.

What are you working on now?

I’ve just finished recording an entertaining music video series I created called Nefertiti Keeps The Beat, where I introduce young readers to Nefertiti, her friends and their instruments. There are eight episodes available on You Tube and social media.

I’m also campaigning with my friend, B Lydum for the United Nations to add a new Sustainable Development Goal target to improve early years’ mental health, support and wellbeing.