The Power of Pictures with Ed Vere 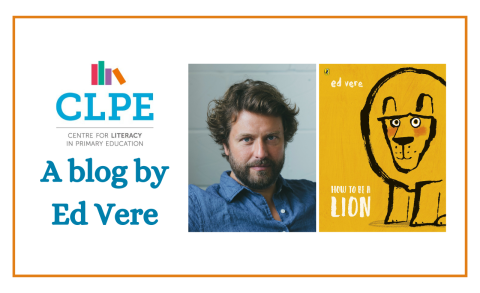 As someone who draws, I’ve always taken it for granted that pictures say a lot. They always spoke to me. From my earliest years, through teens and into adulthood. Picture-books, comics, fine art. I was also a voracious reader. The two went side by side – both saying a lot, in different ways.

I was also a child who struggled hopelessly with writing projects at school. I don’t know why but they defeated me. A part of me shut down and inevitably felt stupid. But, I could draw and I could say things with those drawings.

Cut to many years later, as an author (accidentally finding my way there through drawing), and a conversation between me and CLPE’s wonderful Charlotte Hacking – both talking in raptures about the power of visual literacy and its inexplicable absence from the curriculum. Might there be something we could do?

I’m often struck by how we ask children to approach literacy tasks. How sterile and uncreative they can be and how far away that is from how I and many author/illustrators I know, find and develop our ideas. To create characters, worlds and ideas, we often don’t write, but draw.

It seems we're not very realistic when we ask children to write. We need to think creatively.

If a child finds writing difficult (spelling, grammar, etc), any writing task comes front loaded with unpleasant problems. When they’re allowed to start a creative writing project by drawing (designing a character, for example), you grow an idea inside that child's head before they've written a single word. Once an idea lives and breathes, a child has a base to write from and the motivation to want to.

Education in this country works well for the academically minded – and badly for those who think in other ways; those who are equally bright, but think visually, or spatially. By opening up visual literacy and allowing drawing into the process of writing, we stop leaving those children behind and the difference to their educational outcomes radically improves. *

Nearly all children love drawing when they begin primary education, and most have lost confidence in it by the time they leave. They come to believe there’s a right and wrong way. There isn’t. In losing drawing, they lose a vital form of self-expression. In an age when mental health issues are rife, we cannot afford to squander these innate tools, which, if allowed to develop, help us to understand ourselves as we navigate our complex world.

A huge aspect of the ‘Power of Pictures’ project Charlotte and I consequently developed aims to give teachers the understanding and confidence to use drawing with children, and to (gulp) actually draw themselves. Many haven’t drawn since they lost their own confidence in it at 7 or 8. That loss of confidence is often passed on. We try to break that cycle.

Pictures speak to children (older ones included). Understanding this can be the key to discussions you might not have thought possible. ‘Power of Pictures’ teaches that the pictures in good picture-books carry highly sophisticated messages. Often, the written narrative is the teacher’s focus and pictures are bypassed - ignoring a wealth of highly sophisticated narrative information. ‘PoP’ demonstrates how rich layers of pictorial information can be unearthed. How pictures can be open to highly creative interpretation, open to be interrogated, analysed and discussed by a class. Often, children naturally do this for themselves, they’re just not often asked about it.

Children are nearly always engaged by the visual world, but we teach them to brush it aside as they get older. It is a huge loss. ‘Power of pictures’ shows teachers that picture-books contain incredible visual riches and teaches how to dive into them.

Visual literacy deserves a serious place in our children’s education.

* EEF’s recent evaluation of ‘PoP’ found that the programme had a positive effect on children’s writing self-efficacy and writing creativity. The visual element of the programme was also seen to attract learners who may have traditionally struggled to engage with literacy activities.

This article was originally featured in Books for Keeps edition 250 September 2021. Find out more...