The Power of Pictures: An Author-Illustrator's View

by Tim Hopgood, Author and Illustrator 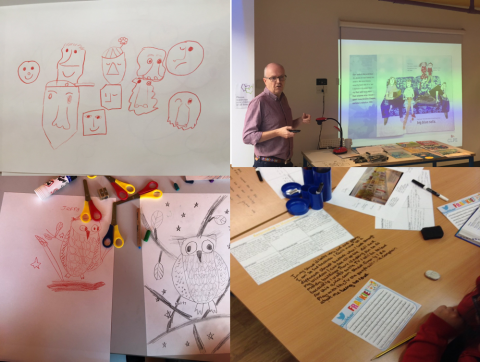 One of the things that struck me most of all through my involvement in Power of Pictures was the sheer fear of drawing that many of the teachers expressed at the start. It was also apparent that by Year 5, some pupils had already dismissed themselves as being not very good at drawing. As someone who has always loved drawing, seeing people view the art materials and fine paper laid out in front of them with a look of fear, reminded me of how I would have felt entering a room with a range of sports equipment laid out ready to be used. Existing in the bubble of a creative industry, surrounded by people who love drawing too, it’s easy to forget that for some people putting pencil to paper does not come naturally.  A blank sheet of paper for some is a sheer delight, the start of a new adventure, but for others, it’s a daunting prospect, wondering where and how to start, waiting for inspiration to strike but pretty much convinced nothing worthwhile will happen.

At the start of each session, we made it very clear that these workshops were not about creating art masterpieces. They’re not even about finished drawings: they’re about communicating ideas on paper. To get the most out of the workshops, it became apparent that part of the session needed to be about demystifying drawing. The way I decided to do this was to get the groups creating a character out of a simple line: starting with a line and then giving that line a personality by drawing it in different ways. By using different drawing materials, the line can acquire different qualities and a range of emotions can be expressed. 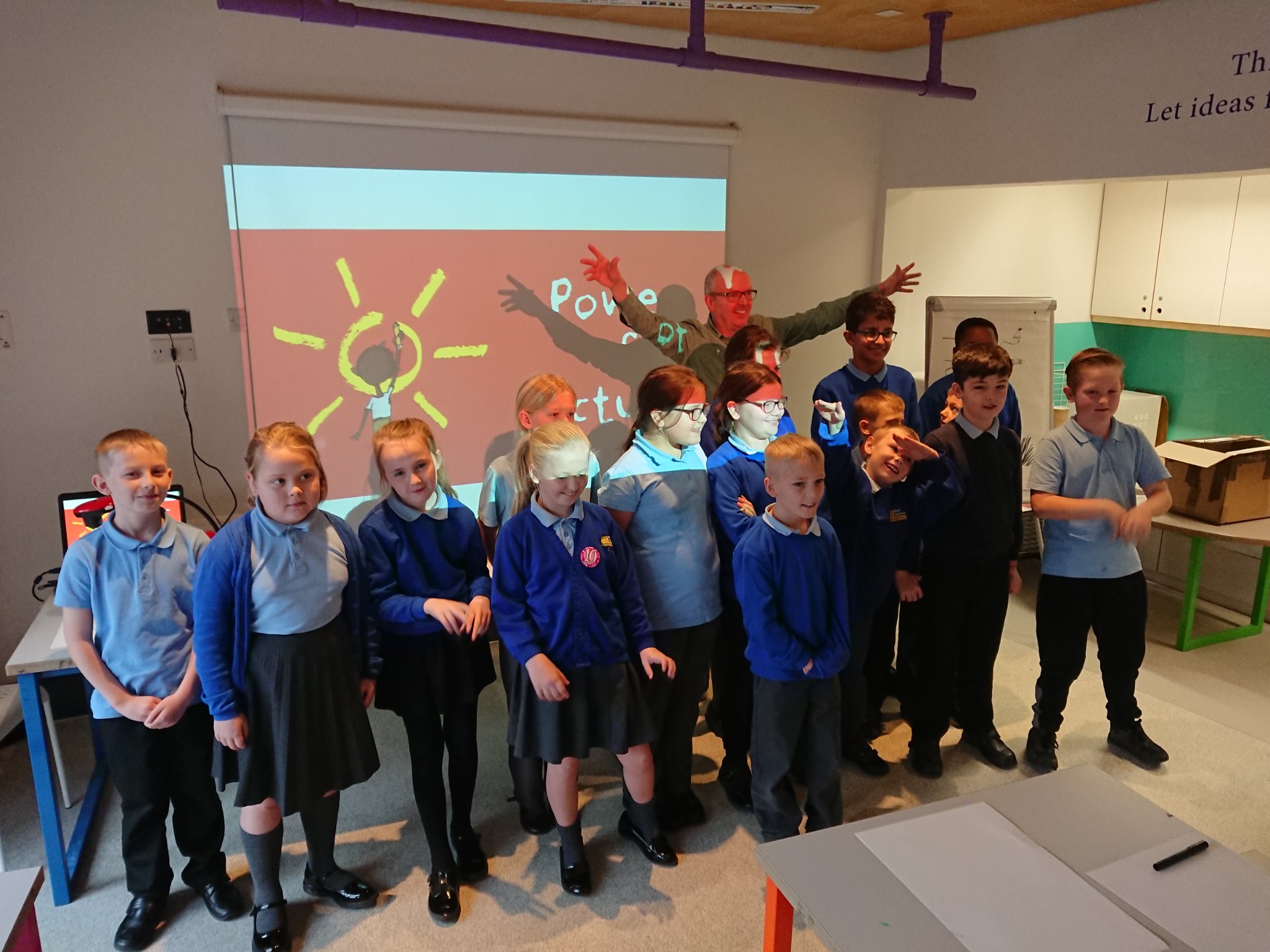 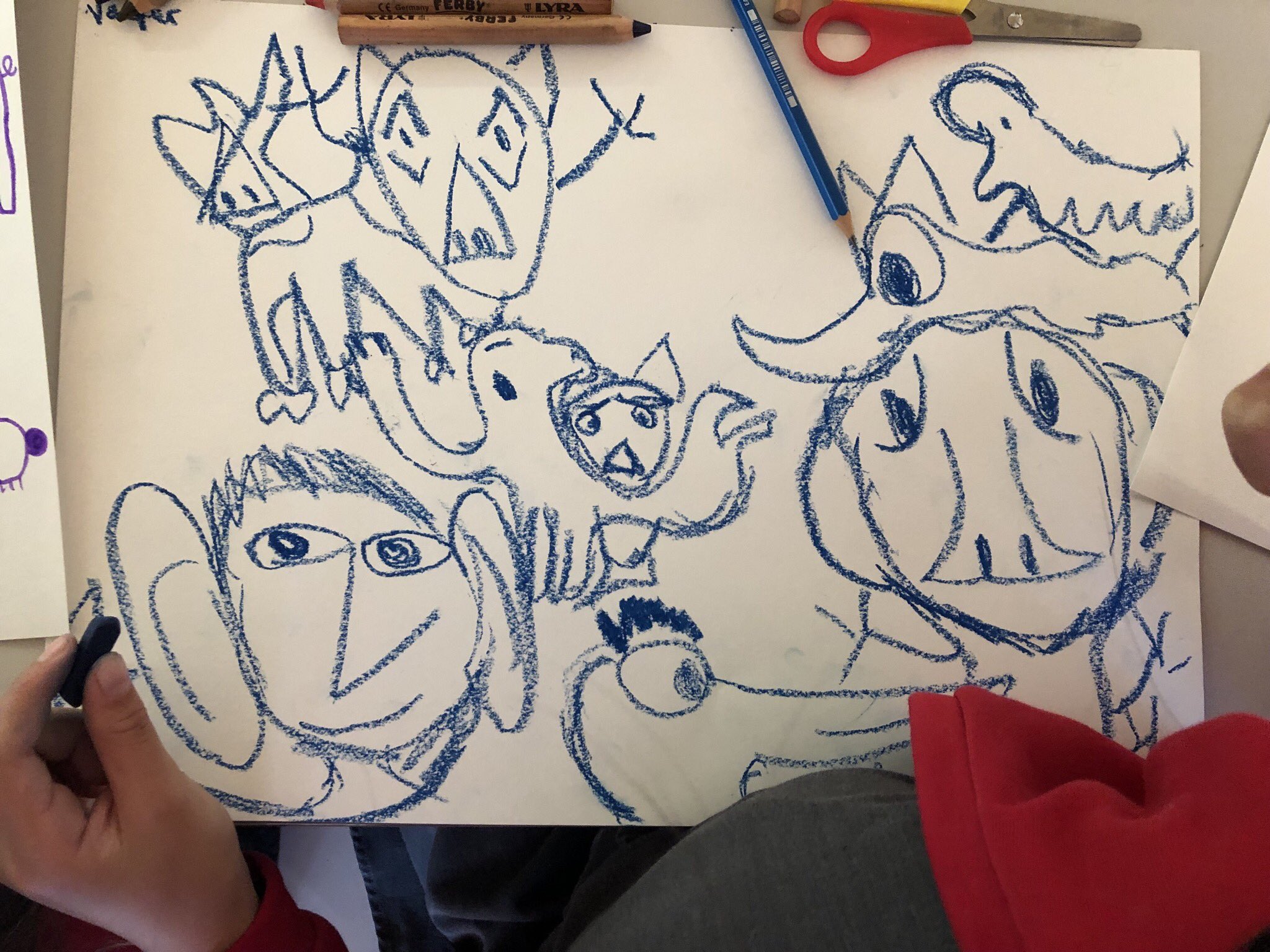 Hearing pupils say out loud “Hey, this is fun!” with an element of surprise in their voice and listening to them talking excitedly about the characters they had created, it was clear that we’d left all notions of good and bad drawing behind. A worksheet approach lends itself particularly well to this type of work. Working on several sheets of paper that can be moved around and cut up rather than on a fixed page in a book all helps to allow creativity to flow. I always write in this way too, starting on sheets of loose paper. Handwriting rather than typing feels more natural to me, it allows ideas to flow more easily. Writing at the speed of your thoughts, scribbling out sentences, crossing out words all helps to get ideas flowing. And then eventually transferring the words to a fixed document, typing it out creates an opportunity to stand back from what you’ve written and think about it more objectively. 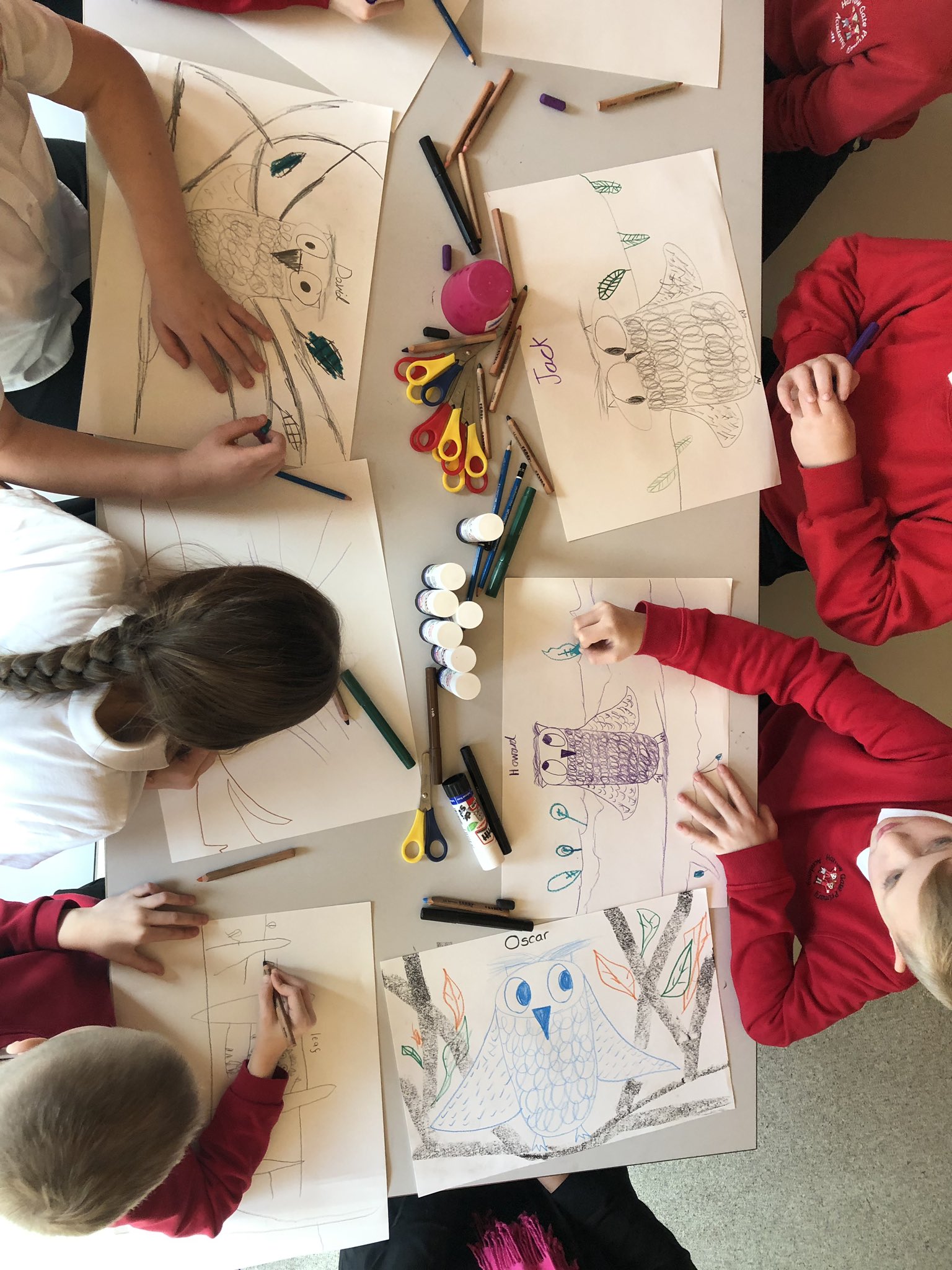 As part of my sessions I got everyone to draw an owl, using simple shapes, and we drew it together, step-by-step. I was a little worried that this approach might be too prescriptive. However, I found it fascinating to see how each owl was completely different despite everyone following the same set of instructions. Each owl had a personality of its own. A simple start that led to many possibilities, it was easy to see how each owl was a character looking for a story.

Prompting pupils with questions like - ‘Where does Owl live? Does Owl have any friends? Has something just happened to Owl? What might happen next?’ Most pupils had no difficulty filling their sheets with lots of ideas. Some were enthused enough to start thinking about and drawing a setting and additional characters too.

One of the things I was keen to express in the sessions was not to be afraid to change your mind. An important part of the creative process is recognising that sometimes we have to give up an idea and change our minds. It’s not unusual for story ideas to run out of steam and sometimes there’s no better way to fix this than by revisiting and modifying your initial thoughts. Re-writing is accepted as part of the process of improvement and development, but I wonder how often is it applied to drawing in school? Allowing pupils the space and time to redraw their characters, to modify their thoughts proved to be very effective in strengthening their ideas and approach. Suggesting that original drawings that had been produced at a small scale were redrawn much bigger was particularly effective and produced some very striking results.

By the time we were looking at how the characters were placed on the page, and thinking about what was being shown in the illustration and then what was being said, and how the two might differ or contradict each other, it was becoming clear to all involved that the possibilities were endless. My sessions ended by encouraging pupils to show not tell and to create a gap between what the words are saying and what the illustration is showing - skills that are at the heart of a good picture book.

Exploring new ways to tell your story and deciding on the best way to communicate your idea so that it works on different levels will keep you busy for a lifetime. It’s the reason why people like me enjoy the process so much and the reason why we can’t stop!

Find out more about the Power of Pictures, book your place on our innovative course...