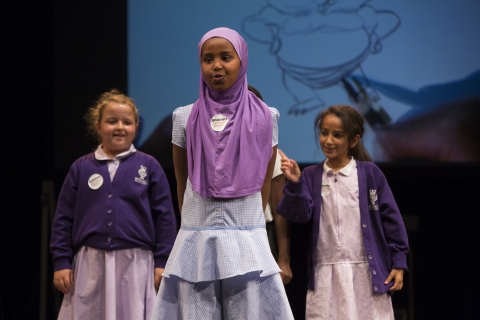 Exploring poetry in all its forms is a lot like sprinkling fairy dust over all of your pupils in the primary classroom and I mean ALL of them: the more confident and the more reluctant readers, writers and performers. It has taken me a long time to realise this but my position has shifted to evangelical in the last few years.

Two decisions were key to this: I entered some of my Year 6 pupils into the CLiPPA Poetry Award in 2015 and I participated in the 2017 Power of Poetry research project at the CLPE. I have to admit that I used to delete lots of emails about competitions before really reading them as I barely had time to teach let alone find time for extras. It wasn’t until I went part-time that I finally took the opportunity to read the emails and I entered the CLiPPA competition.

At Savile Park Primary in Halifax I only taught my group of Year 6s twice a week. So one week I spread out all the poems from the anthology Let in the Stars in front of them, said: ‘Choose one you like, decide how you want to perform it, practise and then show me next week’. Now, some might see this as a laissez-faire attitude towards teaching, I would argue that it gave the pupils agency and authenticity (principles we used to talk about a lot in my English department at secondary level). So we practised, filmed and entered the competition.

One of the very few times I have squealed with delight at an email was when I received one from the CLPE saying two of the pupils had been chosen to perform on the stage at the National Theatre. My Head was delighted. I recruited a parent to accompany me and the four of us set off early on the train from Yorkshire to London (funded by the Siobhan Dowd Trust).

The experience of taking part in a full technical rehearsal was for me one of the highlights. Of course performing poems in front of the poets themselves would have terrified me but I learnt a lot seeing my two pupils stand on stage in front of several hundred people and perform brilliantly. Their school has a Hearing Impaired Unit and a signing choir. As a result both used gesture to learn the poems off by heart and to convey their messages so clearly.  I was truly in awe of them. This year at my other school we are dedicating two weeks of English lessons to preparing performances for the CLiPPA competition from Reception to Year 6.

It has been quite easy to persuade my second school to adopt the whole-school approach as my Head there had already agreed to me being part of the Power of Poetry project. This project has been transformational due to the quality of the workshops, the length of the project and the camaraderie of the group. We also had a lot of homework in the form of academic articles to read and classroom research. This was fundamental to underpinning the project and our professional development. If you ever have the chance to take part in a longer CLPE project, take it!

We had workshops with well-known poets where we looked closely at language, wordplay, form, voice and rhythm. We read silently, we read aloud, we chose poems, we explained our choices, we performed alone and in groups and we wrote. We did everything we ask our pupils to do and we thought about the impact of our decisions in the classroom. Perhaps most rewarding of all, we shared our successes: Those children who were reluctant to read and now chose poetry. Those children who didn’t like to perform and were happy to be part of a group performance. Those children who thought poetry had to rhyme or was ‘babyish’ and suddenly found it was harder than they thought and they liked the challenge. Those children who were quick readers and now had to learn to slow down and explore every word.

What have I learnt and what do I try to pass on to the classroom teachers in our staff meetings? Make time for competitions - you never know when you might hit the jackpot. Drop poems in all the time and at every opportunity. I always have something like Things You Find In A Poet’s Beard by A F Harrold in my schoolbag. Do not confine poetry to one half-term unit (although author studies are good too!). Physically move about when you read aloud, use your hands, feet and voices. Use poems to explore syllables and rhyme. Learn poems off by heart as it fortifies the soul. Give yourselves and your children permission to write poems about whatever interests them. They may all be lists. They may all be about school dinners. That’s fine.

It was called the Power of Poetry for a reason. It empowers everyone.