Only Connect - What Reflecting Realities means to you? 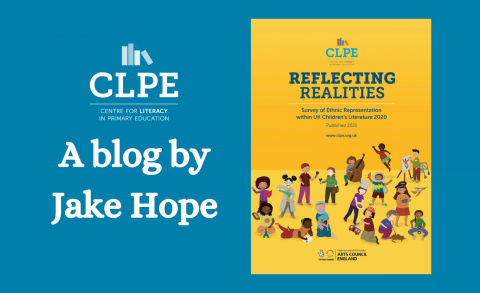 Reading is about connections, bringing text and reader experience together.  Some books connect with us more directly than others, resonating with our culture, thinking and lifestyle.  The library sector has long used the maxim about finding ‘the right book for the right child at the right time.’  Being a part of forming that connection and witnessing it happening can be massively powerful as it is often the point at which the door to becoming a lifelong reader opens for the first time.

So what kind of disconnect can be caused by not seeing yourself in books?  Prior to 2018, when the inaugural Reflecting Realities report was published by CLPE, there were no official figures on cultural diversity in children’s books published in the UK.  The first report found that only 4% of books featured characters that were people of colour compared with 2020’s figures which saw an increase to 15%.  As impressive as that increase is, it still falls significantly below the 33.9% of primary aged children who currently come from a minority ethnic background.  Given the shifting demographics in the UK, that means prior to the inaugural report, not only were children’s books not reflecting the lives and experiences of a large number of children and the groups and society they are growing up in, but that the commercial potential within this audience was not being unlocked.

Prior to 2018, it was widely acknowledged that there was a problem with representation in children’s books; indeed in 2006 Arts Council England organised the Diversity Matters symposium to discuss the systemic inequalities affecting children’s books and publishing.  This led to a number of well-intentioned initiatives and campaigns being launched, including Seven Stories’ Diverse Voices competition to find culturally diverse stories and/or authors and a promotion to showcase/highlight the best culturally diverse children’s books. I was lucky enough to be involved as a judge in each year the competition ran and to chair the selection panel for its subsequent promotion.  Diversity Matters also encouraged a number of important grassroots initiatives like Around the World in 80 Picture Books which I spearheaded through Lancashire Libraries.  Grassroots promotions are often a key means for making national priorities available and relevant at a local level.  As had been the case previously, however, whilst activity flourished initially, it died back when the focal point for the industry began to shift to other arenas.

The question now is how much has changed?  Without a clear measure of what was being published it is hard to know how much long-term impact this activity had.   The CLPE Reflecting Realities survey has provided an evidence base through its clear and replicable structure from which action and recommendations can be made to address inequalities.  It’s true to say that positive momentum often acts as a catalyst for further change.  Related initiatives since the publication of Reflecting Realities include BookTrust Represents, which aims to promote and improve representation of people of colour and which is underpinned by its own research; the brilliant Pathways into Children’s Publishing by Pop-Up which is creating opportunities for under-represented illustrators and widening the field through visual representation; Spreading the Word’s Breaking New Ground which maps creators who are people of colour; CILIP’s Pen & Inc magazine which seeks to amplify titles by under-represented voices – one of the inequalities facing inclusive titles is often that they are published by smaller presses and so visibility is harder to achieve.  The magazine also features articles and interviews which provide additional insights and highlights best practice.  Alongside this, the CILIP Carnegie and Kate Greenaway medals, the UK’s oldest children’s book awards underwent a diversity review, taking stock of barriers that might exist within its processes and taking action to remove these.

Watching the sector creating critical mass to make meaningful change happen feels very positive.  And indeed for change to be  embedded and long lasting, it has to be holistic and wide-ranging.  We can see, that the momentum building around this research is already yielding change in the types of books that are being published and that are garnering attention.  For that to continue, it’s important that every aspect of the sector – writing, illustrating, publishing, agenting, bookselling, librarianship, teaching, reviewing – is representative and draws upon a range of lived experience.  The more successful we are in building a diverse and representative industry, the better placed we will be to ensure reading is inclusive and relevant to all.  It is important for people to understand and recognise that the change that is growing out of this collective action is not a threat, but rather a way to recognise and celebrate the vibrancy and richness of the society we live in and the rich tapestry of stories and ideas that connects us.