Lands of Belonging, a history of India, Pakistan, Bangladesh, and Britain: A blog from Vikesh and Donna Amey Bhatt

by Vikesh and Donna Amey Bhatt 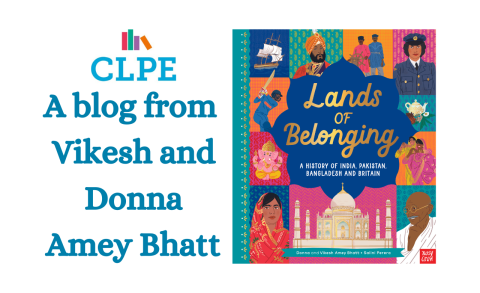 The book we pitched, and the book we ended up writing are two very different things. Fortunately, the second book is better. Our idea originally was a close look at the Partition of India, and what the rehoming of so many displaced people in the UK meant for our culture here. We’d imagined the majority of the book to be a celebration of British and South Asian culture, but the more this was explored, it became obvious we couldn’t explain the modern day, without fully investigating the past. We have our brilliant editor Rachel at Nosy Crow to thank for shaping it into something far more coherent.

The change in strategy meant that we were now tasked with writing about subjects we had less knowledge of. What became obvious, was that both Vikesh who has Indian heritage, and Donna whose family are British, both had the exactly the same gaps in knowledge. So much of what we know is glamourised: The Raj, Queen Victoria’s Indian companion, Rule Britannia. The brutality behind the scenes has been conveniently kept quiet.

From what we both remember, for every mention of India in the curriculum there are fifty of Henry VIII, and for a population where people from a South Asian background are the second largest, that no longer makes sense.

One of the prompts for Vikesh wanting to write this book, was the feeling he had growing up of not feeling like he belonged and being made to feel he was a scrounger. Not even his parents could really explain the events that had led them here. As with so many people of similar background, they have experienced racism in all its forms, and ignorance is always at the heart of that.

We have two young boys, one who arrived a week before handing in our final manuscript. We believe they both deserve better than an education focusing on princes, kings, and British armies. Living in the age we do, we have access to a whole world’s history, and exploring it should be a great pleasure, and something we can all learn from. But this book isn’t even the history of the rest of the world, it’s British history, and understanding its legacy is of huge importance.

Race is something that so many people from all kinds of backgrounds often feel uncomfortable discussing. It can get heated, and people can be worried about not saying things in exactly the right way and offending someone. But really, in order for things to get better we all need to be open to talking race. That can mean being honest about your own experiences, and listening when people tell you that the small comments made about things that appear harmless are hurtful. We recognise that it’s helpful to have tools and starting points to do this, and we hope our book can provide that.

Our ambition is that Lands of Belonging can empower teachers and parents to tackle tricky subjects. There is so clearly a gap in the current national curriculum, where we really have focused on certain parts of history for too long. The East India Company and Partition are a huge part of British history, and there are classrooms full of children who would benefit from understanding.

The second half of the book is really the idea we originally pitched. It’s a positive look at how the immigration of so many Indian, Pakistani, and Bangladeshi people have been a positive thing for our country. We look at places, words, and things you might not realise have Indian heritage, and the individuals who have shaped our culture so brilliantly.

It is a huge, shameful part of our history that we have often made people from India, Pakistan, and Bangladesh feel like they do not belong, when it was the actions of our country that bought them here in the first place. The country we live in now would be unrecognisable if that hadn’t have happened, in both very obvious ways, and so many more subtle ones.

September will mark the 75th anniversary of the Partition of India. It was the largest mass movement of people in human history. Millions of people fled their homes to new countries entirely, millions more were killed in the conflict, and the struggles still exist today. Seventy-five years is a long time not to really understand what happened, and so we thought we should do something about it.

Discover Lands of Belonging, a history of India, Pakistan, Bangladesh, and Britain by Vikesh and Donna Amey Bhatt and illustrated by Salini Perera, published by Nosy Crow...