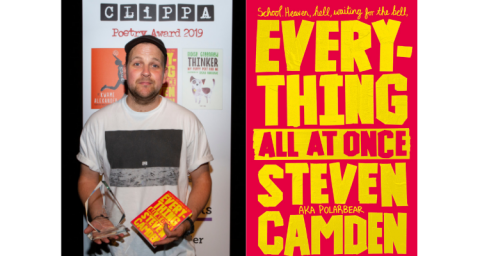 Poet Steven Camden won the CLPE’s annual children’s poetry award, CLiPPA, in July 2019 for his collection Everything All At Once (Macmillan Children’s). Charlotte Hacking, CLPE’s Learning Programme Leader, and lead on the Power of Poetry research project, interviewed Steven to discuss his win.

I met with Steven Camden just two days after winning the CLiPPA 2019 for his debut children’s collection, Everything All at Once. In between, he’s been to the Bradford Literature Festival and back to London to the Unicorn Theatre for a celebration of work he’s been doing with a local Primary School. This exemplifies everything he works for; to bring his stories to as many young people as possible and to inspire them to find the stories within themselves.

As his alter-ego, Polarbear, he has been a star on the spoken word circuit for over ten years, performing nationally and internationally at events including Glastonbury and alongside artists such as Kate Tempest. With a CV like this, you may expect him to be highfalutin, but he’s one of the most modest, humble writers I’ve met. ‘It feels lovely to win this award’ he tells me, ‘it just wasn’t on the radar for me, I genuinely didn’t imagine this happening. You make these things and it’s as close to my personality as it can be, and then it’s over to you as the reader. So it’s ridiculously exciting for it to be recognised and it also means that more people are going to run with it and pick it up.’

See the highlights from the 2019 award ceremony on Flickr.

This collection is a perfect example of one that older children can engage with and enjoy on a personal and emotional level. The masterful way in which he weaves words to capture the spirit of secondary school life is what makes this a very special collection, capturing the humour, heart and soul of school cloakrooms, corridors and classrooms with such authenticity. I ask him what allows him to write with such genuine insight into the teenage experience? ‘The world of Everything All at Once was part my secondary school and part a secondary school I had a residency in at the time. I morphed them together in this landscape in my mind and so that made it real. The people that it’s based on are multiple versions of me, so those moments come much more naturally because I’m living it like a film, almost relaying what I’m seeing instead of generating it. It’s fun going, ‘I’m in Maths, my name is Akeem’ and then painting that. What am I feeling on Tuesday morning at 10.30? If you do that, everything will take care of itself, I don’t have to fabricate anything.’

That piece of his personality also feels evident in his three novels for young adults with HarperCollins, Tape (2014), It’s About Love (2015) and Nobody Real (2018). The settings and characters seem so real and so lived; the dialogue is completely authentic. ‘My whole thing’, he explains, ‘is about mining ourselves. I’m lucky, I grew up around people from all over the place and my family are from all over the place, so I have a pot of things to draw on. Everything I write is about where I’m from; everything. I want to celebrate it through my work. I’m not interested in writing about a thing. I’m interested in writing about people, who are attached to things and who are going through things. The worst case scenario for me would be people thinking ‘he’s written a book about this.’ I’d rather people said I liked the one about Ryan, that’s the biggest compliment for me. There are things in the books and in the pieces, but front and centre, I just want real people.’

Discover Steven's poems and our associated teaching resources in our Poetry section.

He credits his fascination with the musicality of speech for the exceptional lyricism and rhythm in his words; ‘Writing dialogue is the most fun thing in the world for me as a writer, people speaking back and forth. I love that. If I’m not in rooms with people, I can’t write anything. I genuinely can’t. I write the most when I’m around people talking. It’s all music to me, the journey within; when to beat fast, when to leave a space, it’s all musical – I hope. It’s the music of actual people. I’m from musical people, whether that’s my Irish side or the Caribbean side, I’m from people who just move in a certain way, and argue a certain way and leave space and have a laugh.’

Watch Steven Camden discussing his inspiration with our Poet interviews.

Film is another major influence on him, allowing him to become involved in his narratives in a multisensory way, ‘All the books are films. Score and image, it’s a completely sensory experience for me.’ On writing the poems for Everything All at Once, he explains, ‘In my mind it’s like one of those documentaries where you float the camera up and it’s like, now we’re going to Room A Chemistry, then we’re going back to that person and there are connections in there that to some people are obvious or not depending on how much you want to look. What I hope is that people just dip in, pass it around and if you’re stuck on a train, you might read it through and notice that’s him or that’s her; those little Easter Eggs all the way through.’

Having experience with writing across a range of forms means he can be playful and precise with the layout of text in his novels, experimenting with different fonts to demarcate changes in characters, laying conversations out on the page, almost like a script. He tells me that ‘I’ve played more and more each time and some people genuinely hate it – it’s a real hassle for them.’ But in moving to compile a written collection of poetry, he was able to hone this craft. Poems such as Michael vs His Brain (Again), Detention and Gazelle, owe as much to their placement on the page as their use of language in allowing the reader to become so deeply immersed in these moments. Had he found it difficult, I wondered, moving from spoken word to becoming a page poet? ‘I’ve got friends who are poets of the page, who are knowledgeable, exciting and playful with the form, people like Nafeesa (Hamed), Anthony (Anaxagorou) or Warsan (Shire) and I’m looking at them and going ‘wow’. The science of that, the scalpel of that – then thinking right, what’s my version? And the fun was in playing with that. Gaby (Morgan, Steven’s editor at Macmillan) was really integral in that. She gave me a wide berth to play and when something was clearly for its own sake, I had to justify it and she’d show me things that would work better. Some of it is about space, some of it is with speaking it in mind, but what a treat to be able to choose the way something looks, that’s incredible, and a relatively new thing to me.’

Learn more about form and poetic devices with key examples for primary classrooms.

As someone who writes so well from the teenage perspective, I was curious to find out if writing was something he thought he would do when he was a teenager; ‘Nobody told us that we were allowed. No one ever told us that and we didn’t know anyone who did it, so there was that thing that it wasn’t for us. If I’d have known, it would’ve been in my mind and I’d have got over my insecurities and been willing to share stuff much quicker I think, if I’d have thought I could. It’s so nonsensical now, but I think I thought writing was just things like The Railway Children.’

So what did lead him into the world of crafting such carefully curated narratives? ‘I am here today because of hip hop and because of a man called Paul Dennis. I’d been rhyming on the quiet for a little while and when I was about 18, he would send me tapes of beats. I should have been a waste of his time, but he allowed me to learn a craft by rhyming on his music, hoping that he’d like what I wrote, writing stories that way. That confidence and that wanting to impress him, that’s what made me want to share and left me feeling like I could.’

It's just this feeling that he wants to pass on to the young people he works with on such a regular basis; ‘I’m kind of on a mission. I just like the idea of being an example, I think it should be on the shelf as a career, like being an accountant or rapper, or footballer. Not everybody wants to write, but everybody is allowed.’