High Quality Children's Books: A blog about Ride the Wind by Nicola Davies 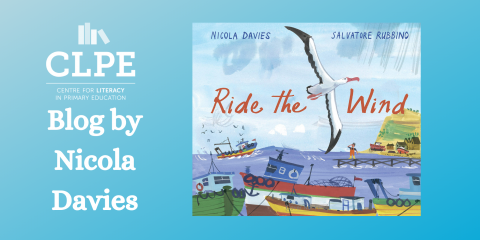 All writers are asked ‘where do you get your ideas from’. It’s such a hard question to answer. For me stories grow like tangled roots, twining round each other, so that its hard to tell what started from where. Sometimes the process is so mysterious and happens at such a deep level in my brain, that it’s only afterwards that I can identify how the roots of a story wriggled their way up into the light.

Ride the Wind is a bit like that. I started writing about albatrosses, and ended up writing a story about a boy and his father, about separation and loss, and about bringing something wonderful out of suffering.

I’m not certain how that happened but it went something like this.

Wandering albatrosses have always fascinated me. They have always seemed magical, mythical creatures: their huge wingspans; their ability to roam in seas too wild for any human to cross; their lifelong fidelity to their mates and to the remote islands where they breed. All of these gave them a very special place in my heart.

The desire to share that magical information came from the threats that they now face, thanks to our insatiable hunger for fish. The long line fishery that fills tins of tuna around the world, drowns albatrosses by the tens of thousands, as they get caught on the hooks meant for fish. Many albatrosses wait in vain on their nest sites for the return of their mate, who has drowned far, far away and who they will never see again.

The next components of how Ride the Wind came into my head and heart are a bit more hazy. I was researching where wandering albatrosses feed when they are not rearing a chick, and found that males and females often use areas separated by many thousands of miles. One area that female wandering albatrosses like is the the cold sea off Southern Chile. This is good for human fishermen also, and many small boats, crewed by two or three people, fish the same waters as the birds. It’s a tough life for humans and birds but albatrosses get the worst of it and many end their lives on a hook.

It just so happened that my daughter was travelling, in that part of Chile. I imagined her there, missed her, worried over her and in my missing I felt an echo of other kinds of missing: albatrosses who lose their mate, and Chilean families split for ever when a family member leaves to work far away, and never returns.

I looked at photographs and films of fishing boats on that coast and married them with my own experience of small boats in remote fishing communities in Canada, Norway, Sri Lanka and the Caribbean. And I thought about an albatross waiting, hoping, looking out to sea.

Somehow, one morning I woke up and began to write about Javier, and his father Tomas, and his uncle Felipe. Their boat the Magdalena sprang to life in my heart, her smell of diesel and fish guts was already very familiar to me. And the sight of their little home port felt just like the villages in Newfoundland that I had sailed into, from grey and stormy seas, so many times.

Just as there were many roots of Ride the Wind so there are many shoots leading out from it that teachers and children can explore. These have been wonderfully well set out by Eva John in her marvellous teachers notes, but here are a few that I find most interesting. There are further questions growing out of all these shoots, some with factual answers and some with imaginative ones.

Albatrosses flight. Albatrosses are uniquely adapted to fly huge distances using very little energy. They use the constant strong winds and rough seas of the wildest oceans of the Southern Hemisphere and North Pacific to transport them with hardly a wing flap over thousands of miles of ocean in search of food. Modern radio and satellite tags have allowed scientists to plot their journeys and that information is available and quite easy to track down on line. How do the shape and size of albatross wings help them to fly in the way they do? What do they think about as they track over the ocean for days and nights on end? What might they see, hear and smell?

Albatross breeding. Remote islands are essential for albatrosses to rear their young. First of all they are safe, with no natural predators to eat up the single egg or fluffy chick. Second they are windy and wind is essential to albatross take off, without it they are just too big and heavy to flap their way into the air. Where are the remotest islands where albatross nest? How do they find their way there (nobody absolutely knows the answer to this yet) What might an albatross feel on its way ‘home’?

Albatross conservation. The combination of slow breeding on remote islands and searching for food over vast areas of ocean makes albatrosses vulnerable to ways in which humans have changed the marine environment. Introduced animals like rats and cats eat albatross eggs and chicks. Not only do adults get caught on hooks when going after what looks like an easy meal, they mistake floating plastic for food, and bring a belly full of plastic home for their hungry chicks. What are humans doing to help protect albatrosses? How many albatrosses of various species are there left in the world? How many were there 50 years ago?

Why do albatrosses matter?

Ride the Wind is fiction, but like all my stories it has its roots deep in the real world. I hope that this story will invite my readers to learn about albatrosses and encourage them to think about the sea food on their plates, where it comes from and the real cost to the planet to put it there. No one who eats a delicious tuna sandwich wants to kill an albatross but that is the consequence of our love of eating fish. It’s time for us all to think more deeply, and behave more compassionately towards our fellow humans and all the other inhabitants of our planet, who have lives and loves, just as we do.

Find out more about Ride the Wind and how to buy your copy.

Walker Books have free teachers notes available for the book, download them here.