High Quality Children's Books: A blog about Between Tick and Tock by Louise Greig 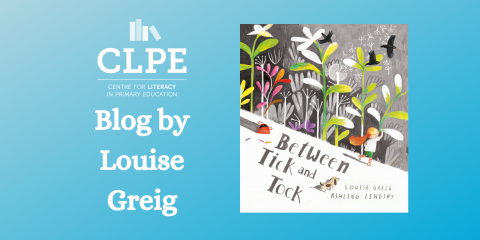 I am delighted that Between Tick and Tock features as part of the CLPE course programme for Inspiring Writing. I hope it’s a book that can open up a lot of discussion in the classroom and inspire teachers to encourage children to look at different ways of approaching a subject. Most of all I hope it can help to give children the confidence to experiment with ways of expressing themselves through the written word.

When I wrote the text I definitely wanted to do something with the stopping of time but it had to be something young children could relate to. I like ideas where children are empowered in some way so the ability to stop time feels especially thrilling but although it may sound obvious there also had to be a great reason for stopping time. In essence Between Tick and Tock is a story about a young girl, Liesel, who lives in a clocktower in an ever rushing grey city. Liesel pauses the clock bringing the city to a moment’s standstill so that she can rush through the hushed streets to sprinkle beauty and kindness where she sees it is needed. When she starts the clock again the city awakens to a brighter, kinder place. I think this is something we can all identify with! We can all relate to a grey, ceaseless, noisy city that has no time to notice the small things. Being the only one moving around a city where everything is frozen in time gives considerable rein to the imagination.

A good starting point might be for children to imagine what they would do to help a city if they had Liesel’s ability to stop the clock for a tiny moment. Liesel’s elevated position in the clocktower means that she can see everything happening in the square below all at once. I have Liesel sorting things that are lost, lonely, stray and stuck. Perhaps children could make a list of different examples of scenarios that could be helped in a city. My favourite moment is when Liesel asks the bus driver to stop by a lilac bush to release a trapped butterfly! Small kindnesses can feel momentous.

Language is, of course, our majestic resource offering a great cauldron of possibility. There are lots of techniques that can really help to bring life to a text. Throughout the book you can probably identify various techniques I have used. You might notice how I have occasionally linked scenes with certain words deliberately chosen to intensify meaning for example Liesel has ‘eyes that watch’ and ‘hands that know’. ‘Watch’ and ‘hands’ are both ‘clock/time’ words and they appear in the same scene as the clock.

I have described the city as wearing a frown as if the city itself is a character. Trams grumble and trains growl as if they are living things with feelings and voices. Children might be able to think of other non-human things that could have a voice.

Language is there to be played with, juggled around and turned upside down and inside out.

I hope classrooms have fun with Between Tick and Tock!

Find out more about Between Tick and Tock and how to buy your copy.