A blog all about Old MacDonald Had A Phone 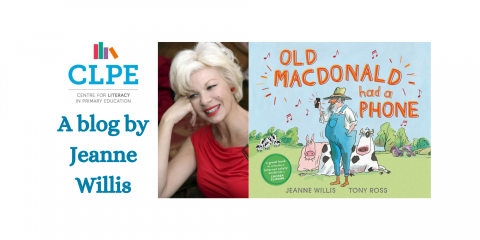 Why write a picture book called ‘Old Macdonald Had A Phone?’ Well, me and old Macdonald have quite a lot in common - we both struggle with our beards, we’re both of a certain age and let loose with a mobile, we have both landed in a heap of manure on occasions.

It’s too easy to get into trouble with a smartphone. Only the other day, Old Macdonald couldn’t remember where he’d put his glasses and pressed ‘send’ without realising that predictive text had transformed his innocent message to the stable lad into a cheeky proposal, after which the lad became so unstable, he fell off his horse.

Phone faux pas can have a funny side. When technology makes a monkey out of me, I try and laugh it off but increasingly it’s nervous laughter bordering on hysteria as technology mutates faster than Covid, and smartphones continue to outsmart me.

Is it any wonder? The Willis’s didn’t have a landline until 1967. If the house caught fire, my mother had to run the length of Sherwood Avenue to the public phone box in her melting winceyette nightie in order to dial 999. If it was already occupied, she’d wait patiently for her turn until our house burned down. ‘If only I had a mobile tucked into my girdle, I could call the fire brigade immediately!’ she never said.  At the time, the idea of a portable wireless telephone was as far-fetched as flying to the moon.

Two years later, Apollo 11 landed.  I was nine and I will never forget the day, but for all the wrong reasons. As Neil Armstrong took one small step for a man, I was hurling into a plastic bucket after a violent reaction to a dose of thread worm pills. This might explain why I still associate giant leaps for mankind with nausea and sweating, but it’s not the whole reason.

The fact that I can’t operate a smartphone to its full mind-blowing, gobsmacking capacity is neither here nor there, but the fact that very young children can and do worries me greatly.

How young? I’ve seen them skidding round kitchens on potties, gritting their milk teeth and swiping away at their screens with tiny prawn-like fingers, eyes transfixed on to goodness knows what – yet they are still too young to wipe their own bottoms. Smart babies, eh? Good luck them, I thought. Then something changed my mind.

In 2014, I discovered a gadget on Amazon for attaching phones to potties. For a pocket money price, toddlers could now watch Mr Tumble online and keep an eye on the stock market whilst learning to control their bowels - it scared the poop out of me.

I started to look at statistics to see whether I was worrying over nothing.  When I last googled, 48% of children had been exposed to social media by the age of seven. One in three had experienced cyber threats, three in four had experienced online bullying and within eighteen months of Online Grooming becoming a criminal offence, over five thousand cases were recorded by the police and they were just the ones that got caught.

I’ve spent nearly forty years writing picture books for those little people. I’ve met thousands of them on school visits and despite major advances in technology, physically and mentally they haven’t evolved at all – they’re the same as I was at their age; innocent, full of curiosity and heartbreakingly easy to fool. They believe in fairies. They also believe - as children always have - that grown-ups know diddly squat about being a child today. For the first time in history, they might just be right.

With the best will in the world, we can’t hope to know what our children are doing online 100% of the time. In the constant struggle to keep up to speed, how can we protect them?  Teaching them earlier about online safety has to be a good start.  Schools are doing a fantastic job, but when I first looked into this, there were no picture books on the subject and given that books are great learning tools, I decided to write some.

My online safety series published by Andersen Press is written in humorous rhyme and based on traditional children’s stories with a contemporary twist; comforting familiarity with the shock of the new – an element of shock felt essential, even for the very young as the subject matter is serious. The first title, ‘Chicken Clicking’ deals with online stranger danger. On the last page, Tony Ross’s sly fox is waiting in the woods for the gullible little chick, with his dinner plate at the ready. We could have softened the blow, but surely a scary story ending is no bad thing if it helps children avoid a far scarier one in the real world.

‘Troll Stinks’ came next, based on The Billy Goat’s Gruff and covers online bullying, swiftly followed by Hashtag Goldilocks, which warns about the long-term consequences of over-sharing.

Finally, let’s put on our walking boots and visit my elderly farmer friend, the man behind my latest book, ‘Old Macdonald Had A Phone’. This is a comic take on what can happen when certain individuals become obsessed with phones to their detriment and everyone else’s and how to strike a happy balance. Addiction is a real concern and the story carries a strong message, but this title takes a somewhat lighter approach – even I can appreciate that smartphones are amazing, endlessly useful and above all, fun – remember fun?  I do vaguely and while I care enormously about the welfare of my pint-sized readers, I promise I have not got the Fun Police on speed dial.

Teachers, you’ll no doubt be delighted to hear that ‘Old Macdonald Had A Phone’ can be sung to the original tune with a moo moo here and a baa baa there, so have a quick gargle and give it some welly. Even the best-regulated classrooms sound like farmyards, but now you have a really good excuse – YOLO!

*  N.B In text speak, apparently YOLO means You Offensive Little Oik - no?  You Obese Lazy Oaf?  You Old Laughable Ox? Yep, that’ll be the one...

Find out more about the book, Old Macdonald had a Phone by Jeanne Willis and Tony Ross. (Andersen Press)

Our teaching team have also created resources for Jeanne's series of cautionary tales including Chicken Clicking, Troll Stinks and #Goldilocks.