A blog all about My Big Book of Outdoors

by Tim Hopgood, Author and Illustrator 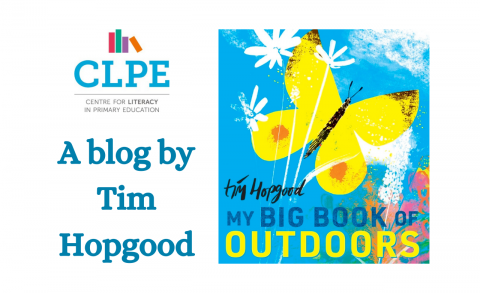 My Big Book of Outdoors is my first solo non-fiction title, it's also my first solo title for Walker Books. For me personally, it’s a landmark in my publishing career as it's 15 years since my first book was published. In those 15 years I've learnt a huge amount about the craft of making picture books and I think it's fair to say, I've probably poured all of that knowledge into this bumper book!

‘Rather like how a snowflake is made, with lots of tiny elements sticking together that in the right conditions, become something beautiful!’

My starting point was to ask myself a series of questions about the natural world that at aged 60 I didn't know the answers to! I also thought about the kind of questions a young reader might ask or want to know the answer to. These initial questions became a collection of thoughts and ideas that became my outline proposal for the book. Rather like how a snowflake is made, with lots of tiny elements sticking together that in the right conditions, become something beautiful!

I spent several months researching the answers to my questions and my first draft for the book was at least three times the amount of text of the final version. The process of editing my mountain of information was made much easier with the invaluable experience and guidance of the editorial team at Walker: Denise Johnston-Burt,  Sarah Handley and later in the process, Sophie Hallam. In total I put together three drafts and each time the text was simplified so that the information was presented in the clearest way possible while still retaining meaning. As this is a non-fiction title for young readers I wanted the language to be straightforward and engaging. I find the process of trying to encapsulate an idea in the smallest number of words satisfying, and it is very similar to the way I work on board book texts, redrafting an idea over and over again, cutting out unnecessary words, while retaining meaning, personality and emotion.

‘In a way it's four books in one and as each season passes a different section of the book will come into focus and demand closer inspection.’

While working on the ideas for the content of the book I was thinking back to the type of books I used to love as a child. My dad would take me and my sisters to the library every other Friday and I would delight in the process of choosing my five books. More often than not I would leave with at least one highly illustrated non-fiction title under my arm, books about dinosaurs and the planets were particular favourites. Having struggled to learn to read I was always attracted to books with strong visuals and the sort of books that you could dip in and out of, and that's exactly how I envisaged this book would be used. In a way it's four books in one and as each season passes a different section of the book will come into focus and demand closer inspection.

‘I let nature and the changing seasons determine the colour palette.’

Creating a book covering a wide range of topics allowed me more creative freedom. Normally I would choose a limited colour palette for a picture book, and a certain way of drawing too, but in this instance I let nature and the changing seasons determine the colour palette. The drawing techniques varied as I responded directly to the subject matter, page-by-page. The ever-changing use of artist materials gives the book a lively sense of pace, some pages are loud, the imagery is very bold and graphic but there are plenty of gentle, quiet moments too.

As an illustrator with a background in graphics, I’ve always taken an active role in how my books are put together. Coming from a magazine background I’m used to dealing with a wide range of topics under one cover and I also enjoy figuring out how best to retain the reader’s interest over a large number of pages. The pacing of content and the positioning of text in relationship to an image are two things that I find particularly interesting in crafting a picture book.

‘I love this fluid way of working: it's an open, creative approach that allows the imagery to lead the way.’

The pages have been beautifully designed by Louise Jackson at Walker Books. Louise's positioning of the type on each page is inspired. As we worked together more and more the process became very intuitive. I would leave spaces where I imagined text would sit, but sometimes Louise would surprise me and do something completely different. I would then respond by moving the drawings accordingly. And sometimes we played it dead straight, presenting the information in a really simple, direct way. It really was a case of us each responding to what the other was doing, but always letting the imagery lead the way. I think the positioning of the type gives the book a playful feel, and a lovely sense of overflowing enthusiasm for its subject. I love this fluid way of working: it's an open, creative approach, which feels much more collaborative and not like a production line process which is sometimes the way.

‘The pond dipping image is an example of a spread with lots of different elements on it, it’s an image to ponder over!’

Off the top of my head, the spreads that pop into my head are probably my favourite. The pond dipping image is an example of a spread with lots of different elements on it, it’s an image to ponder to over! It took me a long time to figure out how to fit everything together, with a realistic sense of scale in a pleasing composition that also allows room for text... so quite a lot of different things to juggle with! I love the colours and textures on this spread too.

And then there are pages that are very graphic and bold. Growing a sunflower spread is another favourite, the intensity of the colour against a white background works well. Another stand-out spread for me is the barn owl flying at night. It’s a striking image, drawn in ink and using a limited colour palette and on the left-hand side is a poem I called ‘Silent Searches’. There is a sprinkling of poems throughout the book. Not having ever published any poetry before, I was a little hesitant about including my own poems, but this now definitely something I’d like to continue.

‘What started as a series of questions became a love-letter to Mother Nature.’

In producing the artwork I felt a huge responsibility to convey the beauty and wonder of the natural world. At times I found the process overwhelming: when you study natural forms and you look closer you see just how spectacular they are. In the end, what started as a series of questions, became a love letter to Mother Nature. My hope is that this book will inform and inspire young readers to find out more about the natural world that surrounds them and to respect and admire all that nature has to offer us.

Get your copy of My Big Book of Outdoors by Tim Hopgood, published by Walker books...