A blog all about the Hope Jones book series 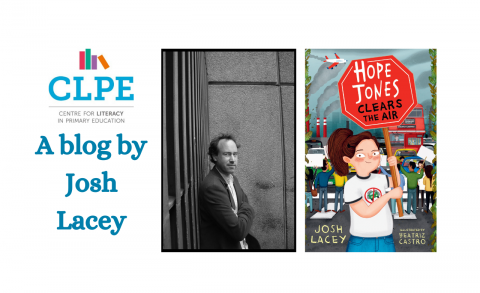 Today I was sent a reading record written by a girl in Year 6:

“I would like to be Hope Jones because she is just a normal girl but she wants to change the world and that is what she is doing. This was a great book it was very inspiring and made me want to save the world too.”

I was so pleased to read this - and not just because she liked my book. No, I was particularly delighted, because she had understood exactly what I was trying to achieve with the Hope Jones series: I wanted to write about an ordinary girl who wanted to do her own small part to combat climate change.

The first Hope Jones book, Hope Jones Saves the World, is the blog of a ten-year-old girl who has just decided on her new year’s resolution: she is going to give up plastic.

She won’t take a plastic spoon in the café. She turns down the offer of a free plastic folder at school. She tries to persuade her mum not to buy anything plastic in the supermarket, whether it’s a plastic ketchup bottle or a bunch of bananas in a plastic bag.

She knows she won’t save the world by giving up plastic. But she’ll make a difference, however small.

Hope Jones is not Alex Rider, Harry Potter, or one of those characters that we all know well from children’s books - the chosen one, the special one, the hero who will save us all with their special powers, exceptional skills, or extraordinary intelligence. Instead, Hope is very ordinary, and she doesn’t do anything that any ordinary kid couldn’t do just as well.

I wanted to fill the books with very simple, straightforward, and practical small steps that we could all take. Along with graphs and tables, giving information about the problems, there are simple solutions. For instance, Hope wants to give up eating factory farmed meat, so she offers her readers a recipe for lentil soup. She scrubs the toilet with an eco-friendly cleaner made from vinegar, lemon, and baking soda, and tells us how to make it ourselves.

I hope young readers will be amused and entertained by Hope’s conversation with the chief executive of the supermarket chain (in Hope Jones Saves the World) - and perhaps even be inspired to contact the manager of their own local supermarket.

Perhaps a reader will be inspired to stand for the school council and persuade the school to adopt more green policies. This is what Hope does in the second book, Hope Jones Will Not Eat Meat. In the book, she doesn’t actually get elected. Instead, her class votes for one of her friends, Vivek, who campaigns on abolishing lessons and doing nothing but sport, a populist agenda which wins him a lot of support. However, Hope still lobbies the school, talks to the head, petitions her friends and their parents, and ends up making some important changes.

In the third book, Hope Jones Clears the Air, she confronts the issue of air pollution. One of her friends has an asthma attack, brought on by the polluted air in the neighbouring streets. At the end of the book, Hope builds a green wall around their school playground, getting donations of plants and compost from a local garden centre, and doing the manual labour with the help of her family, her friends, their parents, and the wider school community.

In the months since the first Hope Jones book was published, I’ve had a lot of emails and messages from readers, telling me about their own projects, and the things that they have been doing in their own communities: planting trees or flowers in their neighbourhood, or putting up an information board in their local train station, or writing to big companies, asking them to change their policies and their products. Other readers have created websites, written articles for newsletters, or simply tried to do a bit more recycling.

While I was writing the Hope Jones books, I was very conscious that I wanted encourage and empower children to do their own small part to save the world, while at the same time refraining from making them feel guilty, anxious, or scared.

Most adults feel powerless and paralysed in the face of a problem as vast as climate change, and of course children do too. The responsibility isn’t theirs. It isn’t really ours either. If we’re going to save the world, change must come from governments and multinational companies, rather than the little people (us).