A blog all about Granny Came Here on the Empire Windrush 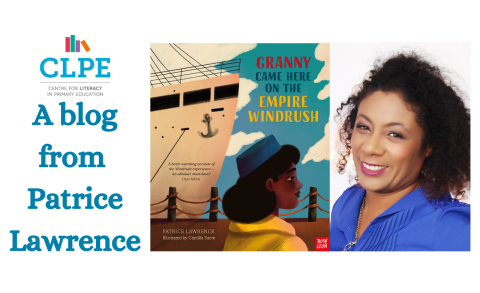 I have always described myself as an angry writer. Perhaps that doesn’t seem like the ideal disposition for a picture book writer, but it’s the fuel that drives me to challenge injustice. I know from many years promoting equality in early years services that children absorb the values of the world around them. Kindness, empathy and generosity, yes, but also society’s prejudices too. This damages all children. Those subject to the prejudices can internalise those stereotypes. (More than one early years worker told me tales of pre-school children of colour fighting over a ‘white’ doll while the ‘black’ doll lay discarded in the corner.) But also children from the majority culture are being shut out of new worlds of knowledge, new experiences and new friendships.

I started writing to reshape my world, I think. I grew up in multi-ethnic, non-typical families. I never saw families like mine in any books or TV programmes. Perhaps by continually writing stories with white main characters and, as I saw it, ideal married nuclear families, I could somehow write myself normal. This continued until my 30s.

Three things changed me. One was having a child and refusing to accept that she would not see herself in books. Secondly, was discovering Malorie Blackman – I can never forget the shock of seeing a British Black family in the TV adaptation of Pig Heart Boy. It gave me permission to include my own experiences in books. Third, was several years working in the not-for-profit sector and realising how the experiences of marginalised people are misrepresented and dehumanised in mainstream society.

I’m known for my YA, but I have always loved picture books. I have reviewed picture books for Letterbox Library for many years. I’m always awestruck by the economy of words and that glorious marriage of text and image. I also know that picture books can be a springboard for conversations about social justice. (Thank four years of judging the Little Rebels Prize for that!)

Nosy Crow wanted to commission a book that celebrated the Windrush generation, but we were both clear that we wanted to centre women in the story. We all know the iconic pictures of the immaculately dressed men disembarking the Empire Windrush, but women’s stories often slide out of history. I was also inspired by the work of Hackney Museum, in east London. They are a fantastic community museum and work hard to collect and share the histories of all local communities. They organised a big Windrush tea party for local elders in 2018 and allowed me to sit in on some of the interviews of elders telling their stories. They were also generous enough to run a suitcase session about me. They have a suitcase of objects and lift each one out. They ask the children to think about who the person might be who owns those objects. That seemed like a lovely idea for a book too.

For me, it was important that a child was at the centre of the book. I wanted to depict loving Caribbean relationships, and the joy of intergenerational story sharing. (Even as an adult, I love my mum’s older sisters telling me family stories.) Finally, I wanted to throw in a few Black female icons. I can imagine that Winifred Atwell will be googled a lot in the near future!

Teachers can use the idea of a bag or suitcase that children can fill with objects that say something about who they are. I recently delivered a session at a schools programme and showed mine – a jar that had been filled with chocolate but was now filled with shells and interesting stones from the beach, a golden bracelet that was a present from the aunty that inspired Granny in the book, a book that was a present from my dad etc. Alternatively, the objects could belong to a historical figure, or a refugee child etc.

I hope you love reading the book as much as I did writing it. I am forever grateful that Camilla Sucre was commissioned for the illustrations. It was the first picture book for both of us, but I think we’ve created something special.