Using Power of Reading to carry a developing curriculum

A Spotlight on: Developing our teaching plans

Published on:
Wednesday, 7 October 2020 - 9:18am
By:
Benji Davies
Tad (HarperCollins) is new to the 2020-21 CLPE course programme, it features on our Developing Writing in the Early Years course. In this blog Benji Davies, author of Tad, talks about storytelling and how Tad came to be.

When I first began to write my own stories I started with pictures.

I turned a short animated film I had made as a student into a picture book. The film was called A Bowl Of Soup. It was about a lonely boy who found a baby whale on the beach and took it home only to be discovered by his fisherman father whereupon they took it back to the sea together. It would become The Storm Whale.

By dissecting the film I had made, by looking through the storyboards, and with some help and advice from my art director and editor I gradually worked out how to adapt the film into words and pictures on the printed page. When I was making the film I drew on my instinct of what the story should be. I didn’t overthink the storytelling process, I just made what I felt was emotionally true and interesting to me creatively. So when I came to dissect the story for the book adaptation I had to work out what the story was actually about - because somehow I didn’t really know. It was deeper than purely what was happening visually. What I found was a simple, elemental story of being lost and lonely, of friendship and mending family bonds.

I threaded words between the images and for me, a new way of telling stories was born.

Around the same time I was experimenting with hot colours in my sketchbook, seeing what characters would inhabit worlds made of pink and yellow and red. A hopeful frog staring at the moon in a pink sky surfaced. I wondered about this character but she had no story. Putting her to one side I carried on with other ideas and projects, making several other books as the years passed.

But I couldn’t forget that hopeful frog.

One day I was drawing in my sketchbook when a tadpole swam into my  thoughts followed not long after by the line: “Tad was a frog – well that’s not quite true, she was almost a frog.”

This seemed to be a new beginning. A new beginning for my hopeful frog. Unlike The Storm Whale, this story began to unfold in words led by a storytelling voice. 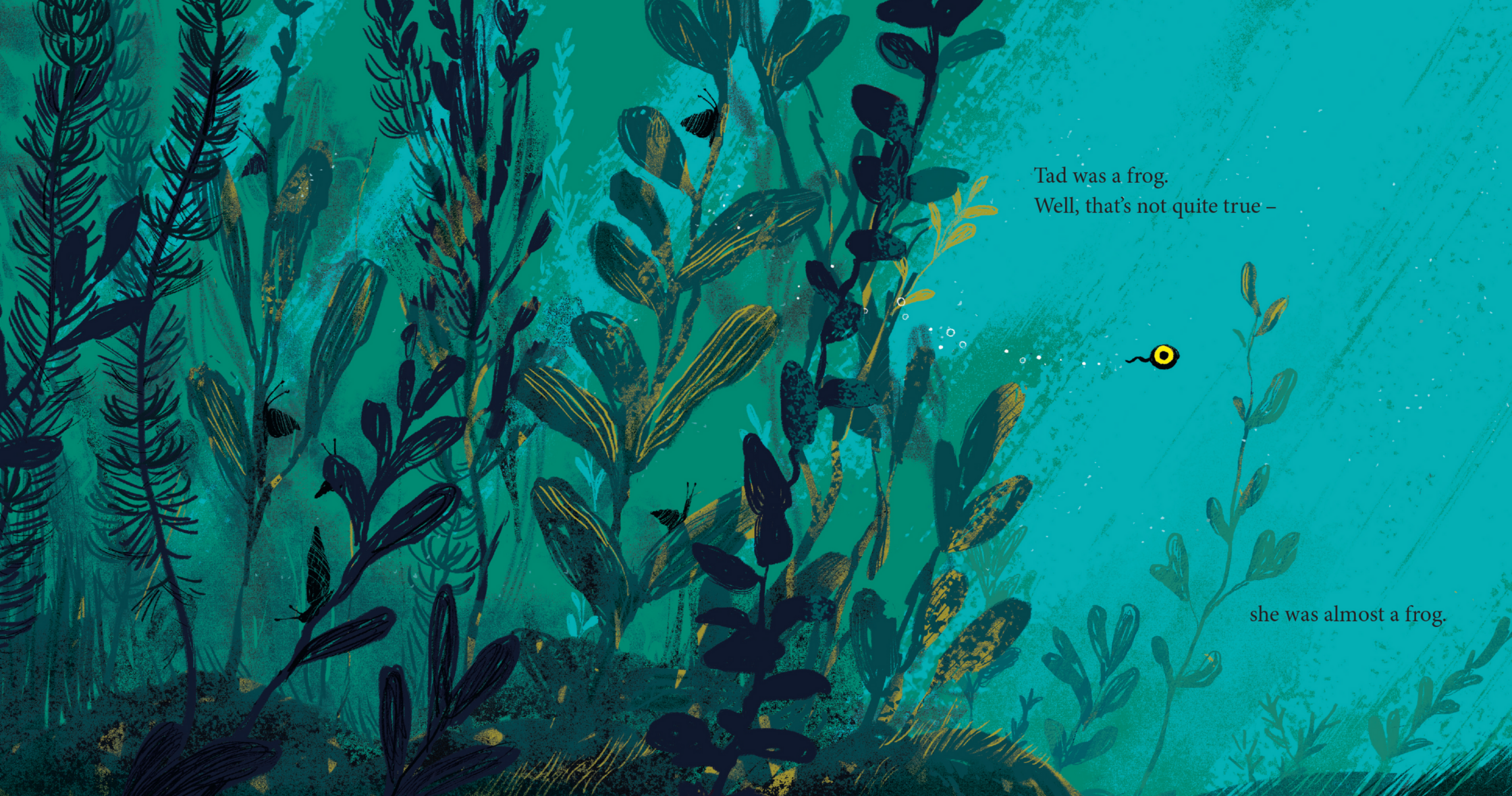 We used to collect frogspawn when I was young. My sisters and I would find a big slippery mass of them in a pond, scooping them up in an ice cream tub and hauling them home, then waiting for the tadpoles to hatch and turn into frogs. I reckon they would have faired better if we left them where they were.

But I learnt a lot about nature that way, by going out and experiencing it. I also loved books about wildlife. I learnt so much by sitting in the school library and poring over the pages of those kind of books.

The life cycle of the frog fascinated me then as it does now. This fully transformative process, from being small and limbless and contained in an underwater world. Growing legs, morphing, changing gradually into a frog that could jump out of the water and breathe air. It struck me that this process had its parallels with being a child growing up, could be relatable to all children finding their way through their young lives. The desire to be bigger, to become grown and capable of leaping up and out into a wider world of possibilities. 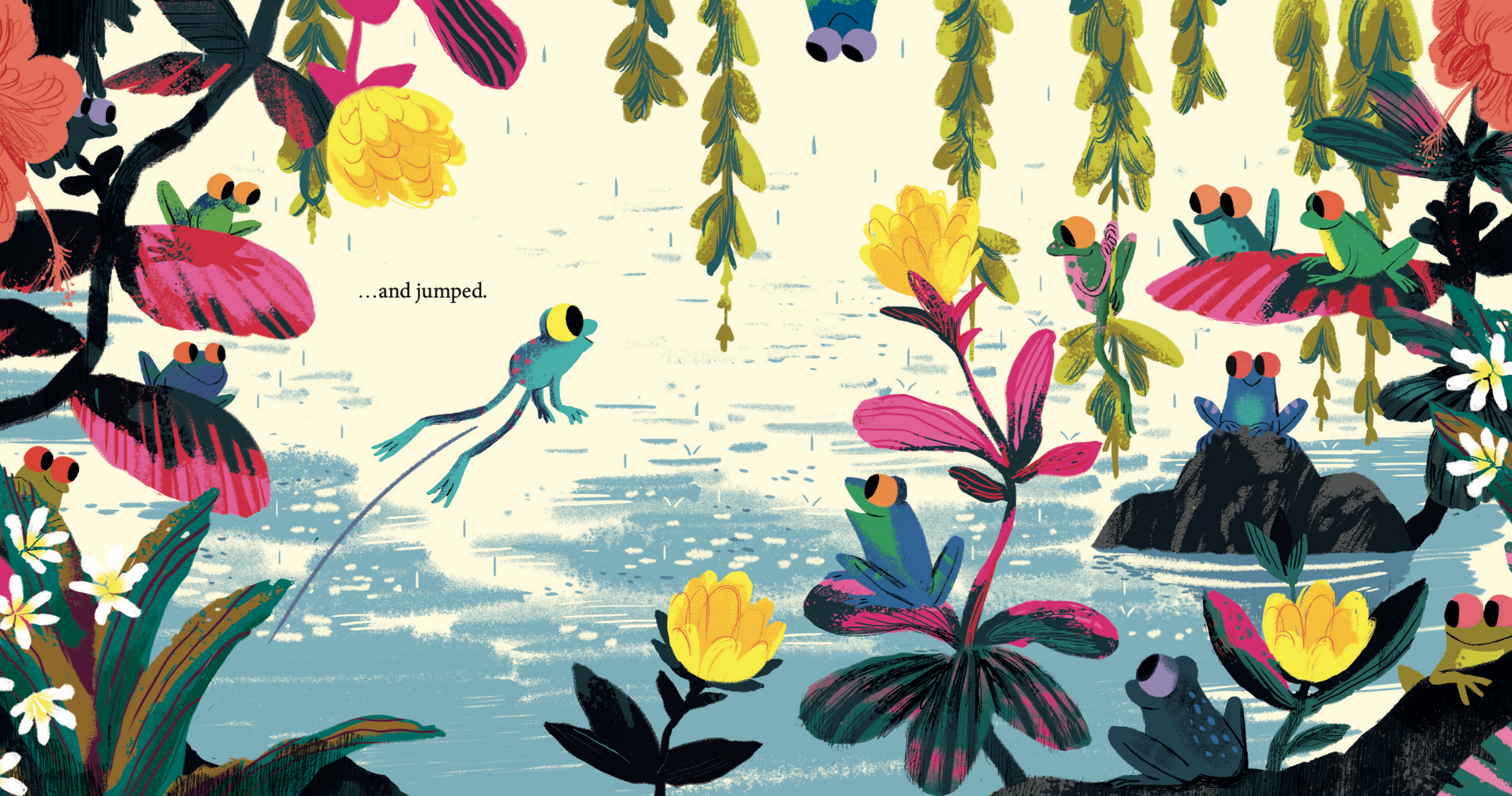 Tad’s story is about being young and small and wanting to grow up, needing to grow up, and trusting that will happen even when it feels like you are always being left behind.

It’s different from my other books in that the story is set purely in an animal world. There are no people or grown-ups, and where in my other books I could illustrate people and houses and objects on a human scale, for Tad I have zoomed right in on the world of a tiny tadpole. The artwork becomes much more about texture and colour and light.

It's also different in that it may have started with a picture, but it was words and the desire to tell stories that made it grow. It taught me there are always new ways to tell stories.

You have to trust your storytelling instincts. Draw pictures that you want to see. Write down words that sound good to you. Tell stories about the world the way you see it and don’t be afraid to try out new ways of telling those stories if that’s how the story unfolds.

Look everywhere, listen all the time, and when you have an idea make a note or a sketch. Those stories have a habit of slipping away.

Find out more about Tad and how to buy your copy.

Tad is new to the 2020-21 CLPE course programme, it features on our Developing Writing in the Early Years course. Find out more about the course here.