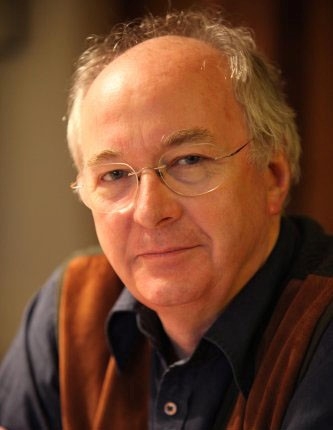 Sir Philip Pullman was born in Norwich in 1946, and travelled all over the world during his childhood, settling in North Wales at the age of 11.

He studied at Oxford University, graduating in 1968 and becoming a teacher. He then taught in middle schools, writing plays during this period on which some of his later novels were based, later becoming a part-time senior lecturer in English at Westminster College, Oxford, with a specialism in oral storytelling.

The first novel he wrote was for adults, but much of his work is for children. Clockwork was shortlisted for the Whitbread Children's Book Award and for a Carnegie medal in 1997.  More recently, Philip Pullman has become well-known for the 'His Dark Materials' Series, fantasy novels telling the story of Lyra Belacqua, a young girl whose destiny is to 'change destiny': Northern Lights, winner of a Carnegie Medal, the Guardian Children's Fiction Prize and a British Book Award, and shortlisted in 2007 for the Carnegie of Carnegies; The Subtle Knife; The Amber Spyglass, which was the first children's book to win the Whitbread Book of the Year; and Lyra's Oxford.

In 2007, his book, Northern Lights, won the Carnegie of Carnegies Award. He was shortlisted for the Man Booker International Prize in 2011.  In 2017, he announced a new trilogy, The Book of Dust, based in the same universe as His Dark Materials. The first volume, La Belle Sauvage, was shortlisted for the YA Book Prize and saw Pullman named Author of the Year at the British Book Awards. A second volume, The Secret Commonwealth, was published in 2019.

Philip Pullman lives in Oxford. In 2005, he was joint winner of the Astrid Lindgren Memorial Award. He believes that 'stories are the most important thing in the world. Without stories, we wouldn't be human beings at all.'

He was knighted in the 2019 New Year Honours for services to literature.