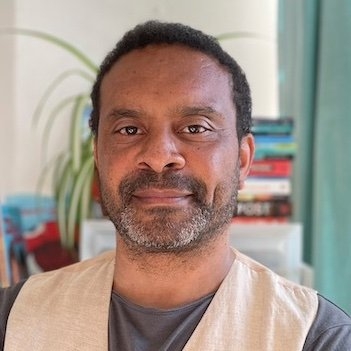 Born in Zimbabwe, Ken Wilson-Max lives in London. He has written and illustrated over 50 books for children. He also illustrates things for grow-ups and businesses and publishes work from other creators through Alanna Max.

As a younger man, Ken made stories from what he saw in his travels. He was excited and so the work was exciting. As he became more experienced and familiar with his surroundings, he saw that everyone had a story to tell. He became determined to inspire others to tell theirs. He found this made his stories much better. It also allowed him to experiment and learn. Since 2014, he’s also been publishing the Chicken Newspaper for children all over the world.